This is an update of our ongoing investigation into the Toronto UFO sightings reports of July 26th 2014. We did not include information on UFO reports from Rochester NY that occurred at the same time and date nor Markham and Stouffville reports (see previous page). The following is limited to the Toronto reports only.

Please note we never will close a case without absolute evidence of an explanation. In other words we do not close cases based on speculation. Please find below our notes, and some images and maps.

As of September 2nd 2014 we have interviewed five direct witnesses to the lights. Sarah Chun who shot the videos that initially were posted to Youtube and twittered was kind enough to answer our questions directly and promptly the following morning July 27th 2014. There are varied times reported in the media of her sighting, but to our queries she reported the total duration of her observation was approx 45 mins between 9pm and 9:45 pm with a total duration approx of the singular appearing object to the East being 25 mins.

The video she shot does not directly depict Yonge Street. What you are seeing is a view looking South on Doris Avenue which is east of Yonge and a much quieter mostly residential street. We were able to determine this by an on-site visit to the location.

Please click on the thumbnail of images below to see a larger version. A new window will pop-up:

The second set of images of the string of lights were taken on the same night facing the same direction as Sarah only further South on Doris Avenue and Olive. Please click on the thumbnail and a larger image will pop-up. 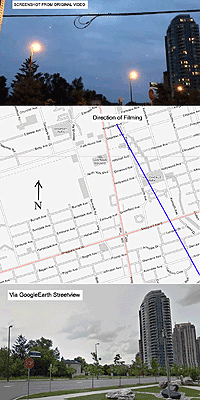 The next set of images are from Roxanna Maleki and her companions who were at the Cineplex Empress Walk Movie theatre located at 5095 Yonge Street which is South west of Sarah Chun's location. We interviewed Roxanna the morning of July 27th 2014 and she too was very helpful in providing us with information and answering all of our questions including the direction she was facing when she observed the object that she describes as looking like "like a space shuttle or an alien plane with sparkles and diamonds coming down." The witness indicated that she was facing South/South West, however we noted from her video, and Google Earth that this may not be the case so we conducted an on-site investigation to confirm our suspicion that she had to have been facing North East for at least a portion of what she was seeing and filming.

Again, please click on the thumbnail for a larger version in another pop-up window.

Please note the witness image including the Mel Lastman Square sign are on the opposite side of Yonge than the Google Image but are both facing the same direction. The angle is only slightly off.

As is shown by the maps and images, the witnesses at the theatre were looking in a different (opposite) direction than the first set of witnesses. It is our belief these (theatre goers) witnesses were looking at the same object as Sarah Chun filmed to the east, but would have been potentially behind the witness at Doris and Olive.

The first UFO report was at 4:30pm July 26th 2014 and these continued through to 10pm. I attempted to speak with the police officer Constable Craig Brister who first saw the lights and who stated it was a quadcopter (in his personal opinion through his Twitter account) from Empress Ave with a string of lights attached, but have not gotten a direct statement from him. The Desk Sgt at 32 Div says they do not investigate UFOs period, but confirmed no police drone was in the air. Police do not normally investigate UFOs and have no set protocol on how to deal with ufo reports should people contact them.

Here is a direct quote: "Somebody did see something in the sky, but what it was we don’t know,” said Sgt. Barry White, 32 Division. “It might have been someone playing with one of those remote control helicopters from one of the condos.”

We were able to confirm that there had been some minor power outages July 26th throughout Toronto including at the nearby subway and at the Cineplex where a brief power out tripped their fire alarm at 9:15pm sending the crowd out of the theatre and shopping complex and who in turn saw the reportedly anomalous light/object. This is approx 2km South South west of Sarah's position.

It is interesting to note that with genuine UAP or UFO phenomenon power outs and electronic failure have been reported to have coincided with some reports in the past. This is just an observation and may or may not be related to what the theatre goers were witnessing to the North East.

From recordings made by theatre goers it is also clear that in the excitement some honest mistakes such as misidentifying an airplane to the South were also made.

There were no objects reported to us that were directly over Yonge Street, but instead they were over much less trafficked residential streets, and larger emptier spaces. This probably helps to explain why there were not as many witnesses as one might think given how very busy the Yonge and Sheppard area is. Media headlines of UFOs over Yonge Street were misleading and added to some confusion.

In the days following the UFO reports we spoke with two different RC drone experts, and we were provided with commercially available drone information from UFO researcher Chris Rutkowski which allowed us to rule out a quadcopter.

We also contacted RC kite flying club members at Downsview, who believe the string looks like how one of their night kites might appear (one actually used the word "obvious" on their Facebook page) but it was not one of their members kite flying that night.

We noted the weather conditions via Weather Underground including wind dir/speed including gusts and visibility. You can have a look at the historical weather data for the location, the date and time frame in question by clicking Weather For Toronto July 26th 2014.

The most plausible lead as far as a possible mundane explanation for the string of lights came from a quote given to CTV on July 27th. Here is the quote: "Alejandro, who did not give his last name, told CTV he saw a few kids setting up a kite with lights attached to it earlier in the evening. "After it got dark, a couple of hours later, I notice a line of lights," he said in an email. "[It] looked like a very potent laser pointing vertical to the sky, but it was the kite these people were preparing."

The exact location of this observation was Doris and Norton.

During our visit to the area in early August we took photos of the parkette at Doris and Norton and determined it was most likely not the location a kite might have been launched from. Having a walk through the area we did note and photograph at least one large kite that was at a considerable height and observed between two large condo buildings. We attempted to find the kite flyer in the hope of asking some questions, but the kite had been taken down before we found its source.

There are several places in the area where a kite could be safely launched and gain considerable height.

On August 10th we reached out to a representative of MUFON Canada in order to share data and see if they had any information that we did not. At that time we were advised they had closed this case, but may reopen it with new information. Unfortunately they were unable to interview any of the witnesses and a member from British Columbia who viewed Sarah Chun's Youtube video "surmised that they were helium balloons attached to a sting or tether, and they also had LED flashing lights attached. The video was shot facing south and with a 25km/h wind coming out the west, the string of balloons would have been tilted to the left, as in the video. The one light way up in the sky would have been one of the balloons coming loose from the line and floating up."

On August 24th 2014 at approx 11pm the following photo was taken and then was submitted to us. This is East of Yonge Street near Sheppard Ave. and it faces North. 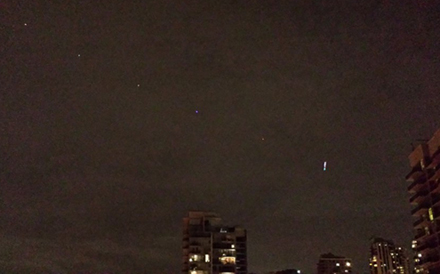 The photographer who lives in the area believes this to be a kite with lights attached and we are inclined to agree.  This photo along with the other evidence leads us to believe the string of lights in the first two videos taken East of Yonge Street were in all probability a night kite flyer.

The object that Sarah Chun filmed that is positioned to the East of her location and well to the East of Yonge Street and that she observed pulsing for 25 minutes prior to its moving off towards the SSW was at an altitude of at least 30 stories minimum, and would be at a considerable distance from the string of lights leading us to think this may in fact be something completely separate from what now appears to be the string of a kite.

This also holds true for the theatre goers. Roxanna's description of "an alien plane with sparkles and diamonds falling from it" may or may not be a night kite flyer, but it seems to lend itself to the kite explanation. The images from the theatre looking out towards the North and East depict a singular light of an as yet undetermined origin. It does not appear to be attached to the kite string that would have to be much farther to the south for all witnesses to have observed it from their respective locations.

Another witness was interviewed who also saw a set of strange lights in the sky on July 26th at approx 9:20pm while facing North from Yonge and St Clair Ave. This is a considerable distance to the South of the other witnesses. If this witness observed the same event as the theatre goers and Sarah Chun the altitude and lumens required would be greater in our opinion than could be explained by a night flying kite with LEDS attached to it.

In conclusion our investigation to date demonstrates more than one object (possibly up to 3 or more) were observed on the evening of July 26th 2014 in Toronto. One is very likely to be a lighted kite. The other object/s at this time remain unidentified and potentially some are genuine UAP phenomenon. It is not unusual during UFO flaps to have several IFOs or identifiable flying objects mixed up with sightings of anomalous ones. At this time we just don't know.

Our thanks and much appreciation goes to the witnesses who kindly answered our questions and shared their images and recordings. The names of witnesses that were provided in this report had previously had their names published through the media and associated with these sightings. All other witnesses remain anonymous outside of our private offline record of these events.

If you witnessed these lights/objects or experienced something unusual you believe may be UFO related in Toronto on July 26th 2014 please contact Sue St Clair at sue@psican.org Your privacy will be protected and your information will be treated with confidentiality.