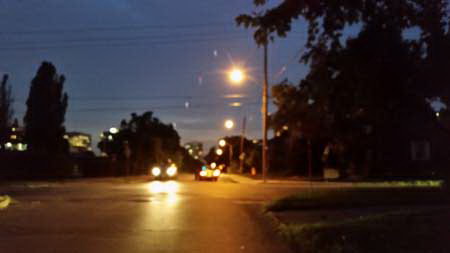 Last evening (July 26th) multiple witnesses saw and some captured on video a series of as yet unidentified lights above the city of Toronto just after 9pm DST.

Here is another video captured by the same witness

These videos were taken from a south facing condo slightly east of Yonge and Finch.

According to the Markham witnesses this video was taken at 9th line and 16th and they were looking towards the east. Again in our opinion this is mostly likely not related to the Toronto sightings, but due to proximity and date/time felt this video should be included in the report.


The Toronto/North York sightings primarily came from the Yonge and Sheppard area.  As of right now, the lights appear to be potentially over the North-Central part of the city and may not have been too far from Downsview Park/Airport area. We are still attempting to pinpoint an exact location.

Currently, there is no official explanation for the lights that we are aware of and are awaiting responses from various aviation and airport authorities.

The lights do not appear to be any configuration for any known aircraft or aerial phenomena.

PSICAN and ParaResearchers both ask any other witnesses to please contact us with information and welcome any other input on these lights.

We will update the situations as firmer information comes in. Please scroll to the bottom of the page for the most recent updates.

According to a report on CP24 ( http://psican.org/links/cp24july272014/ ) a police officer in the area of the sighting is stating that it was a quadcopter (small drone) that caused the sightings.  Sadly, the news report is a bit confusing and incomplete we're hoping for more confirmation on this.

Through our Facebook, we have news of another witness saying it was some young people around John MacKenzie Park (near Yonge and Sheppard) using a kite and lights for “some fun night thing”. This is the right area for the police ‘Tweet’ mentioned earlier, although a kite is not a quadcopter... and also may be a bit North of where the witnesses put the lights which was South-East of Yonge and Sheppard... and the Markham video, if filmed in Markham proper, would be difficult to explain with this.

This said, a hoax, mistake, or practical joke is not out of the question as to the origins of the sighting.  We will keep updating as information is received.

The police officer who Tweeted about the quadcopter was speaking only from the same viewpoint as the other witnesses and was speculating only, according to several mainstream news sources.  This said, people speaking from Toronto Police Services at 32 Division seem to be set on the drone explanation... but again, we are waiting for better confirmation. Police confirm they do not investigate UFOs and are speculating on a potential cause.

Other explanations speculated on by media have been...

A lighted kite -  Wind speed (according to Weather Underground) was 9km per hour with a maximum of 20km per hour... and gusts up to 32 km per hour.  This would have made most kites move quite a bit, but it currently appears to be the best possible speculation.

A possible witness to kite flyers - "Alejandro, who did not give his last name, told CTV he saw a few kids setting up a kite with lights attached to it earlier in the evening. "After it got dark, a couple of hours later, I notice a line of lights," he said in an email. "[It] looked like a very potent laser pointing vertical to the sky, but it was the kite these people were preparing."

This was reported from Doris and Norton Ave.

Helium balloons with flashlights inside of them - put forward by an unnamed police officer is highly unlikely and does not match with videos or reports.

Chinese lanterns to celebrate the end of Ramadan – has been ruled out based on the video, images, and witness reports.

Aircraft queuing up to land at Pearson International Airport - very unlikely. Looking at the time the lights are static and that a few witnesses are reporting the lights as being stationary for up to twenty minutes... had the aircraft been moving away from the witness, they would have faded more (especially with visibility being reported at only 14.3 kilometers) and if landing, they would have dipped into the horizon a lot more notably then the videos show. This said, we amongst others are waiting for information from the GTAA (Greater Toronto Airport Authority.)

Toronto Police confirmed they received several UFO reports Saturday night in the area of Yonge St. and Empress Ave. The first UFO report came in around 7 p.m. Police officers also saw the lights on their way into work around 10 p.m.

Sgt. Barry White of 32 Division. confirmed the UFO was not a police drone ­ although it could have still been a drone.

“A drone is just a remote control. Even one of those little tiny helicopters could be a drone,” he said. “What this thing is, we don’t know, because we never talked to the person who had it.”

Police do not have a protocol to follow on UFO sightings.

“If it was something dangerous and we could do something under the criminal code, we might. Police would go try and check it out,” he said. “But to actually go and investigate it further as a UFO ­ I don’t think we would. I’m trying not to laugh!”

He has not received many UFO calls in his career, but remembers one in 2006.

“Someone saw something flying over the lake ­ it could have been an airplane,” he said. “We didn’t investigate that either.”

PLEASE NOTE: Although some people may assume we (PSICAN and ParaResearchers) are trying to find or prove a supernatural or paranormal explanation for this, we are not.  If all potential explanations remain less than a likely probability, (in other words, a normal/natural/man made explanation is not found,) we will simply list this as unexplained.  Our groups are neutral in their interpretation of these events and experiences and unless evidence is found, refrain from making any proclamations or claims to causation without proper evidence.  This is part of our standing mandate which is viewable at...

A new video has been posted to Youtube depicting what appears to be the same string of lights and a laser pointer from a different angle. We are hoping to discover the exact location and direction this new footage was taken which appears to be on Doris Ave. Thanks to Chris Rutkowski for the tip!

At this point in time July 31st 2014 we are still looking to speak with anyone who witnessed these lights or any other possible anomaly from the evening of July 26th 2014 in North York Ontario Please contact us at july26ontario@psican.org Your privacy will be respected and confidentiality assured.