"Mr. L. was preparing to go to bed when he heard a strange sound like "bum bum bum" outside. He lifted the curtain in the living room and saw a reddish-orange round object hovering over the field to the northeast side of his house trailer. When he looked outside he saw what he described as a robot like creature, about 6 feet tall, within 15 feet of the trailer."

Our thanks to Field Investigator Wido Hoville for the following excellent and very strange report: Mr. and Mrs. L. had come home from a holiday in Florida during the evening of July 22, 1974. Being tired from the trip, Mrs. L. had gone to bed and her husband was sitting up watching the late show on television. They live in a house trailer near St. Cyrille, Quebec. Other trailers on the lot had been installed but the L.s were the only occupants at the time.

Shortly after the end of the show at about 1:15 a.m. on the 25th, Mr. L. was preparing to go to bed when he heard a strange sound like "bum bum bum" outside, much like something falling on the grass. He lifted the curtain in the living room and saw a reddish-orange round object hovering over the field to the northeast side of his house trailer. He then went into the bedroom to wake his wife and while there heard another sound like buzzing and when he looked outside he saw what he described as a robot like creature, about 6 feet tall, within 15 feet of the trailer.

Needless to say, Mr. L. was shocked by what he saw and he and his wife then went into the living room where they looked out and observed three more "robots" (they described them as such because of their stiff manner of moving about, as well as their appearance) close to an adjoining trailer and apparently examining the shaft and wheel assembly. From then on, Mr. and Mrs. L. only looked out occasionally to see if the "robots" were still there and because they were very frightened. During the observation, which lasted until 4:20 a.m., they both saw approximately 15 of the robots together in one line close to the creek. The robots stood there for over 5 minutes and when they moved they moved as if one unit, giving the L.s the impression that they were remote-controlled.

During the following few days, the L.s learned that a farmer had trouble with his dog on the morning after the incident. The dog, which usually barked wildly at the slightest provocation, had managed to slip out of his collar and was hiding.

Although only one object was seen, three of what could be landing traces were found. One was where the witnesses observed the object, the others on the other side of the creek, hidden by high bushes which would have screened anything from the L's view. Since the sighting, when Mr. Hoville's investigation was made, the grass had been cut on both sides of the creek but the landing marks were clearly seen because the grass had grown twice as high in the area of the marks as in the surrounding area. The grass in the landing areas was not burned, but merely swirled as in the cases of other so-called "saucer nests" around the world.

According to the witnesses, they found a strange substance of whitish color where the robots were seen moving about, and close to their pre-fabricated shed. A sample is with Dr. Walker, APRO's Consultant in metallurgy and if analysis yields anything pertinent to the report, it will be included in our Follow-Up column in a future issue. Members must keep in mind that such analysis is done on a volunteer basis and that all of our consultants have positions in industry or education which have to take priority over APRO work; therefore, results may not be immediately forthcoming. Also, since the beginning of the fall, 1973 "flap," many samples of various kinds have been forwarded to Headquarters and lab work is always slow in yielding results.

See the accompanying sketches of the robot and the landed craft. 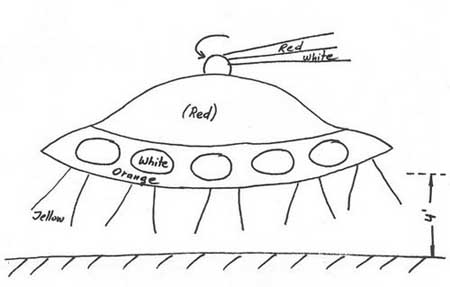 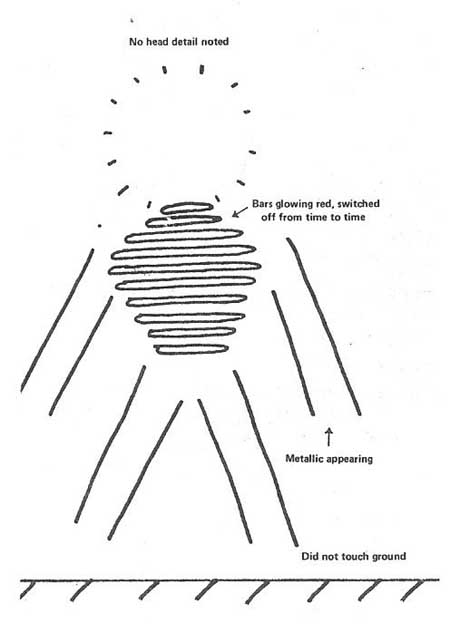