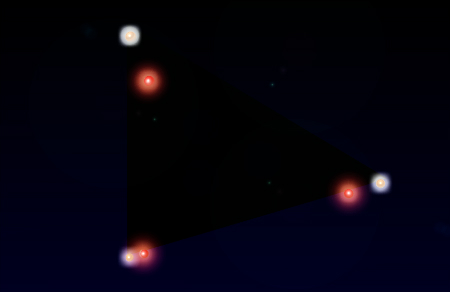 The above image is used to illustrate the following eyewitness account only.

Most ufo enthusiasts are familiar with various contemporary abduction cases.  The foremost being of course, that of Betty and Barney Hill.  Even some people who have little or no interest in ufology are familiar with aspects of abduction cases, as through the years elements of these experiences have seeped into pop culture.  Though each witness's experience is unique they often share common elements.  In recent years we hear little or nothing about cases like these.  Information about  abductions seems to have decreased drastically since the late 1980s. This might lead one to believe that the phenomena itself has dwindled off.  It would perhaps be a mistake to think this though, especially if we consider the case of Joseph Taylor of Sarnia Ontario.

Joseph 'Joe' Taylor, a father in his forties, has had nearly a lifetime of strange occurrences, that have culminated in his having regular UFO sightings, missing time and possible abduction experiences.  Joe, a self-described, level-headed and  sensible person with no interest in publicity, who's main focus is raising his children, has endured a great deal of stress over these encounters.  He does not feel any positivity about the experiences.  He likens himself to being the subject of an experiment.  He has been reluctant to share his story with others as many witnesses are.  It should be mentioned that Joe's childhood and younger years also had some strange occurrences. It was the events of the last five years however, that have motivated Joe to begin sharing his experiences, hoping for any possible insight into their meaning.  He contacted PSICAN in May 2015 and has given us permission to share his story.

On September 5th 2010, Joe and some friends had been out celebrating his birthday in downtown St. Thomas, Ontario.  As he was heading home after midnight, the friend that he had been walking with, had to make a stop at an instant teller.   Joe sat down on a bench outside of the building to wait.  It was a clear beautiful evening with many stars visible.  Joe looked up star-gazing.  He was immediately shocked to see a dark triangular shape with star-like lights at each corner.   It silently crossed the sky within seconds, as it headed eastward. He could not ascertain whether it was 'huge and up very high', or 'smaller and closer to the ground'.  Joe excitedly called to his friend he exited the building.   As he called out he was suddenly hit with a strong realization.  He felt the distinct perception of 'being caught in the act', like the object in the sky 'saw him'.  An electrical sensation encompassed him with the hairs on the back of his neck standing up.  He really wanted to immediately call the authorities, but his friend dissuaded him from doing so.  In hindsight Joe could not help but to think that this night was the beginning of all the bizarre experiences that were to come.

A few days after his UFO sighting Joe was sitting on his back porch relaxing when something caught his eye above the park across from his backyard. He could clearly see an oval shaped, seemingly transparent object, that contained a swirling orange light at its centre, hovering just below the clouds.  It began moving, slowly travelling toward the lakeside town of Port Stanley. It disappeared from his range of vision within a couple of minutes. He went inside and sketched a drawing of what he had witnessed.

A week or so after this incident, Joe, being a 'night-owl', was up late watching television one evening when he felt a strange compulsion to 'go outside for a smoke.'   He normally would not go out so late at night but it was almost as if he had heard a distinct voice in his mind suggesting this.  As he was standing on his back porch, within a few moments he noticed a black triangular craft glide silently over the park.   The craft was very low off of the ground, not higher then the two story townhouses that were nearby.  It was mostly flat, all black, about the size of a mid-sized car.  It included a clear, 'cock-pit' looking portion on the top part of it.  It glided silently over the park.  As strange as it was to see this things became stranger when it began heading toward Joe.  As it moved toward him it occurred to him that this was the same craft he had seen when he was in downtown St. Thomas.  As it came close can see that there is a red light on the bottom middle of the craft.  Suddenly this red light sends out a blinding  and disorienting flash which hits Joe directly in  the left eye with a hot sensation.  After he recovers from this flash of light, he looks up to find that he can no longer see the craft.  He is left with the feeling that something has happened to him of which he is unaware.  He eventually spots the craft way off in the distance, travelling toward Port Stanley, like the one from a few nights previously.

A few days after this incident with the craft with the red light, Joe was walking to the corner store and looked up at the sky.   As he looked up his left eye instantaneously feels the exact same hot, disorienting sensation that he felt when he was hit with the red light.   It was a few months after this that Joe and his family move away from St. Thomas, with him hoping to leave the bizarre happenings behind.

Unfortunately this was not to be the case.

After having settled in to a new home near the small town of Petrolia Ontario, things go well for Joe for many months.   The rural area is a pleasant place for the family to live.  Joe enjoys taking walks to unwind.  On a walk one day as he is crossing a field he looks up to the sky and is overcome by a strong feeling of overwhelmingly intense fear.   When he returns home he is shocked to discover that is more than two and a half hours later then he believed it to be.   He tried to brush this incident off but more fears returned when one night Joe and his daughter notice a large bright glowing light hovering low over the fields to the back of their yard.  On an exploratory walk the day after seeing this light, he is surprised to see a large area of the corn that was growing in the fields behind his yard has been flattened to the ground, like it has been 'steamed over'.

Months pass and Joe is  troubled one evening when he finds himself 'waking up' in the middle of the night, standing in his kitchen, with no idea how he had gotten there.  After he reorients himself he looks out the window to see a low, star-like light  travelling away from the property.   It is not long after this that wakes in the morning to find a gouged out wound that looks somewhat healed, in his lower leg.  Even Joe's family doctor is perplexed by the wound.   Another morning he finds two bright red puncture marks on his foot.  The diameter between the two marks being too large to even be considered to caused by an insect or spider.

In April of this year Joe awoke with a distinctive triangle rash on his abdomen. Fearing that all of this phenomena is UFO related Joe decided that he did not want to remain silent about what has been happening any longer.  He is currently seeking the help of a field investigator.  The events Joe has experienced have been a virtual odyssey through the realms of the unknown and the otherworldly.  We wish him the best and hope that he can find peace with it all in the near future.

Webmaster's note: The name Joe Taylor is a pseudonym that the witness was comfortable in using. Our thanks to researcher Julie Pitt for documenting this unusual case.