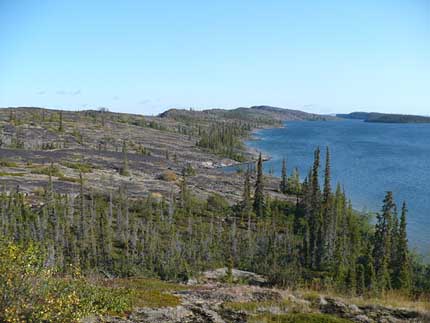 "About 6:10 on the evening of January 4 (1996) Robert Beaulieu noticed a flashing, multicoloured light hovering to the north over Great Slave Lake. The trapper was resting in his truck, parked by the side of the highway about 40 miles from Fort Resolution. When he flicked on his truck lights the object "let out a bright red flash and took off," he recalls. The light preceded him by a couple miles as he set off down the highway at speeds up to 100 mph. After about 20 miles it disappeared.

Mr. Beaulieu was the first to spot what some people think is an alien spaceship visiting the Northwest Territories. Since then "we see it every night from about 4:15 until 7:37," reports Margaret Miersch, also of Fort Resolution. She says that often dozens of people turn out to watch the object, about the size of a distant taillight, flashing red, yellow, white and blue in the sky as it slowly descends to the surface of the ice. She estimates it lands about halfway across the lake, perhaps 15 to 30 miles away. As far as she knows, no one has attempted to find the place where it settles.

Both northerners believe it is not a star. "I think it's a UFO," offers Ms. Miersch. "I still think there's humans in there, but everybody has different ideas," speculates Mr. Beaulieu. He has even recorded the nightly event on video and says that the Department of National Defence has asked to see his tape.

Following coverage of the sightings in the Slave River Journal, dozens of reports of strange lights flowed in, says Constable Bruce Wainwright of the Fort Chipewyan RCMP. Most people are just curious, he says, and UFO hysteria has not engulfed the region. "We have no crop circles or snow circles or anything like that," he chuckles. Const. Wainwright is confident that people are actually seeing the two brightest "stars" in the early evening sky: either the planet Venus, presently appearing in the southwestern sky, or Sirius of the constellation Canis Major, which shows up in the southeast. How these could account for a light descending on the northern horizon is still unclear.

Frank Florian, community astronomer for Edmonton's Alberta Space Sciences Centre, adds that the atmosphere acts as a prism, refracting the light from those bright objects. This causes the white light to be broken up into the various colours of the spectrum. As well, the shifting air currents make the stars appear to move, swirl or flash. The effect is especially noticeable when the stars are near the horizon, because the light passes through more atmosphere.

Mr. Florian says he regularly gets calls about Venus (which will be visible until February 22 this year) but admits some incidents are not so easily explainable. Last year, for example, three Jasper Park wardens claimed that at 11 p.m. on February 3 they saw a shining blue object floating in the sky. It lit up the mountainside with a blue glow until it disappeared behind a ridge about 20 minutes later.

About two weeks ago, two trappers came out of the bush near Fort Resolution, adds Ms. Miersch, claiming they had been chased by two multicoloured, shining things. One was square and the other had wing-like protrusions. When they tried to flee their snowmobiles kept cutting out. The outdoorsmen finally repulsed the objects by throwing a fiery, gasoline-soaked glove at them. "But considering who that story came from, I don't know if I trust it," says Mr. Beaulieu."