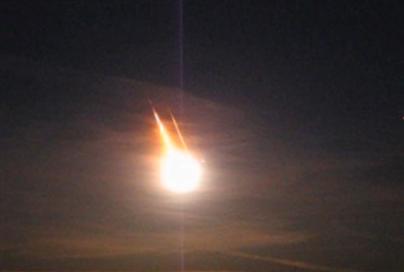 A screen capture from an amateur video sent to Global Television Edmonton is purported to be that of a meteor streaking across the southeastern sky in Edmonton Thursday just after dusk.
It wasn't a bird, and it sure as heck wasn't a plane, but whatever was in the sky over western Canada on Thursday night was very exciting for the people who saw it.

In Edmonton and across the Prairies, hundreds of people reported seeing a bright flaming object light up the sky around 5:30 p.m. local time. It was variously described as green, yellow, purple or blue, and appeared as either an explosion or an object streaking through the sky.

Sightings came from across the Prairies; from as far south as Medicine Hat, Alta., to as far north as Beauval, Sask. - 600 kilometres from Edmonton.

Marcel Gobeil, who lives on a farm south of Edmonton, was in his living room when he heard what he describes as a "loud boom," followed by bright colourful light in the sky.

"At first I thought it was fireworks," said Gobeil. "I've never seen anything like it; it was green and blue and then turned to bright red. It was pretty big."

Gobeil said he thought the object hit the ground about 10 seconds later.

"It seemed like it fell on Beaumont, but it's more likely it landed in Manitoba or Saskatchewan if it was a meteorite," he said.

"It lit up the yard almost like midday, but just for an instant," said Trapp, who farms about 70 kilometres southwest of Saskatoon. "It was far brighter than any lightning strike I've ever seen."

Shawn Mitchler was pumping gas at Radisson, Sask., about 60 kilometres northwest of Saskatoon, when the sky flashed green and yellow.

"It seemed like fireworks or a missile coming down," said Mitchler, who estimates the light show lasted five to 10 seconds.

"My heart just started racing because I didn't know what it was."

"According to NavCanada, it appears that this was the result of a meteorite, but that has not been confirmed," said Rudolph, adding that operations at the airport were not affected.

"What we probably saw was a fireball, which is the result of a rock coming into the atmosphere," said Chris Herd, an associate professor in the University of Alberta's department of earth and atmospheric sciences and curator of the university's meteorite collection.

"The big question now is whether or not anything hit the ground."

Richard Huziak, a member of the Royal Astronomical Society who lives in Saskatoon, believes it was likely a meteor that did land somewhere near the Alberta-Saskatchewan border.

It may be possible to determine a more precise location, since fireball video cameras designed to begin recording when a bright light appears in the sky are located in Saskatoon, Regina, Moose Jaw, Edmonton and Calgary.

"It's very likely this one has been caught. It will show the track through the sky and might show the orbit back into space," Huziak said.

But while many of the witnesses claimed to see something land, Herd said this was most likely an optical illusion. Since the fireball was a bright light several kilometres up in a dark sky, it would have appeared close to anyone who could see it. If something did fall to the Earth, it's extremely unlikely anyone would have witnessed it, Herd said. As the object fell through the Earth's atmosphere, it would slow down and the resulting decrease in friction would cause it to stop burning.

"What we know about fireballs is that they're bright burning up for a certain amount of time in the atmosphere, but then they stop burning brightly. If there's a rock that continues after that, it's falling in dark flight," he said.

"This could literally be a couple of kilometres up in the air and it could fall the whole rest of the way without giving off any light. It could drop like a rock to the ground."

Herd said while fireballs are quite frequent, they don't generally happen over populated areas.

"Something as bright as this is pretty rare," he said.

If something did ultimately hit the ground, Herd said, it would be a very exciting find.

"It's not often that something actually lands and is found, because of all the factors that are working against you," he said, adding he hopes anyone who finds a new rock in their yard tomorrow will get in touch with him.

Meteorites often fall to Earth, but very few cause damage because the rocks often disintegrate as they travel through the atmosphere.

For those who witnessed the fireball, Herd suggested they report it to the Meteorites and Impacts Advisory Committee to the Canadian Space Agency, which can be found at Miac.uqac.ca.