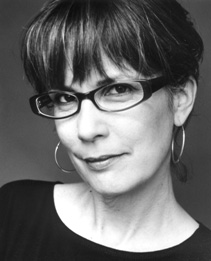 Stacy Horn is the author of  "Unbelievable: Investigations into Ghosts, Poltergeists, Telepathy, and Other Unseen Phenomena from the Duke Parapsychology Laboratory" (Ecco, 2009).  Her research started with a ghost story and led to America's first parapsychology laboratory and nothing less than science's attempt to find evidence of life after death.

Her previous books include, The Restless Sleep: Inside New York City's Cold Case Squad, (Viking Press, 2005) which was chosen as one of NPR's 2005 Summer Picks and received starred reviews from both Kirkus and Publisher's Weekly, and Waiting for My Cats to Die: a morbid memoir, (St. Martin's Press, 2001).

Stacy Horn is also a contributor to the NPR show, "All Things Considered."

Would you tell us a bit about what motivated the writing of this very well researched and written book?

Thank you for the compliment! Originally, what motivated me was the need to write something fun, something less serious than my last book, which was about unsolved murder and how cold cases are investigated. And this subject was, in fact, fun, but it was also serious. When I went down to Duke University to explore the Parapsychology Lab archives I found close to a million experiments designed to try to find evidence of ESP.

I am never happier than when I'm immersed in researching a subject that interests me. I get obsessed. And this was an absolutely engrossing subject. It took three years to write and research this book and for me it was like being on a three year long treasure hunt.That is the best way to describe it. The Duke Parapsychology Lab's initial mission was to use the scientific method to see if they could find evidence of life after death. So what did they find? I think you can imagine how much fun it was to answer that question, regardless of what the answer was. It was a thrilling journey, for them living it, and for me, bringing their story back to life.

How open was the Rhine Center to your work?

I'm always grateful when people give me their blessing to do a book, and I don't know how they arrive at that decision. Hope and faith. They don't know me. But so far no one has ever regretted to agree to work with me. Sally Rhine Feather, the daughter of J. B. Rhine, who was the head of the Duke Parapsychology Laboratory, took a leap of faith and did everything she could to help me. There certainly wouldn't have been a book without her help, and the help of Ellen Pratt, the daughter of Gaither Pratt, Rhine's second in command, and many other people, too many to name!

You uncovered so many interesting facts and links to Rhine's work that the public probably was not aware of, such as the link between the case that the Exorcist was based on and Rhine's work. Would you explain?

This was an example of how a weakness can be turned into a strength. I don't have a background in science, and when I first got down to Duke and started going through the archives I freaked. Most of their work went over my head and I was having a hard time understanding it. Now what? I've come all this way, I've got a book contract, now what do I do??

So I turned to the lab correspondence, and all the letters they wrote to each other and other scientists, describing their work. It was through the letters that the story emerged. It was also how I became aware of some interesting side trips they took. I kept coming across the letters from people all across the country who had experienced something strange that they couldn't explain. They were reaching out to the lab for help and answers. Like the priest who wrote about a family in his parish who were going through something frightening. He turned out to be the initial priest in the case that went on to become the book and movie The Exorcist. The priest didn't think it was a demon, he thought it was a poltergeist and that was why he was writing the lab.

The letters were my favorite part. I never knew what would come up and what fascinating side-trip a letter might lead to. Some of these letters became chapters.

In your opinion, what was the most surprising fact that you uncovered about Rhine or his work?

That's easy: the fact that the results of their experiments were valid. I looked at all the objections critics have made over the years about their work and in the end, none made a convincing case to reject the Lab's results. At the end of my book I write that I took away two ideas: There might be an unidentified source of information out there, along with unknown methods of transmission and processing. Also, we have a lot more to learn about consciousness.

Why do you think there is such a strong interest in the paranormal?

Also an easy question to answer, and doesn 't take a lot of explanation. What could be more irresistible than the possibility that death is not the end and that we might have abilities beyond those which we know and understand today?

There has been, and continues to be, a lack of a satisfying response from either science or religion to many of the things that apparently many people experience.

Have you had any personal experiences with the paranormal?

Only a couple and they happened many years ago. I'd love to have one now. Something unequivocal. And preferably something not frightening.

But the one I like to tell happened when I was around 4 or 5 years old. I had wandered off from our house and gotten lost. I was always taking off and getting lost. I found myself in front of a small house, and an elderly woman was out front with a bunch of cats. I asked her if I could come in her yard and play with her cats and she said yes.

She invited me inside, gave me some milk and cookies and then walked me home. It turns out I was only a few blocks from home, but I get turned around and lost easily. ( I'm the same way today. I come out of the subway and it takes me a minute to get my bearings.)

A year later I remembered the lady and went back to her house to play with her cats. When I got there I found a house that was destroyed. The roof was partially caved in, the lawn was overgrown, and it was clear to me even as a child that this house had been abandoned for a long, long, long time. I stood there confused, trying to figure out what it meant, and a woman from the house next door asked if I needed help.

"Where is the lady who lived here?" I asked. "No one has lived here for many years," she answered. I didn't know where to put that. I knew I had met her, but I could also see the shape of the house and the lawn. I didn't think ghost, I was just really perplexed. I said okay, or thanks or something and the woman went back inside her house.

I went into the house to investigate. It was just a mess. Then I heard a voice say go into the bedroom. This didn't frighten me, but again I was perplexed and confused. Where had the voice come from? It was a tiny place and only one room could have been the bedroom, so I went inside. In the bedroom was a cardboard box. I looked and inside the box was four kittens. I picked up the box of kittens and took them home. I told my mother I had found them and could we keep them and she said yes!

I'm changing my answer. I want a paranormal experience now, but one that involves kittens again.

Would you introduce us to any upcoming work we can look forward to?