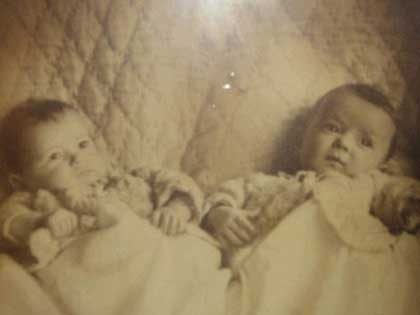 A close up of the babies in the very old photo found within the "haunted" trunk.

Since I was small I've experienced things most people do not, such as "seeing" people walking around in my bedroom at night, distinctly hearing "voices" when no one was around, yet the information, things I couldn't possibly know, given from these "voices" turns out to be accurate. I've been able to somehow receive information regarding certain family members and situations that I had absolutely no way of knowing, situations which have not yet occurred, but then do in fact come to pass exactly as I have predicted, especially regarding deaths, illnesses, accidents and pregnancies.

Due to all these experiences, it lead to me reading at a very early age countless books on the occult, metaphysical, and all things ghostly.

Now that I am older I am far more comfortable with this so called ability.  I don't scare from what I see or experience as easily, and I strongly believe that death is simply a transition, and that our soul carries on after our body dies, and that our loved ones can and do communicate with us after death.

However, as a child it was a different story. The experience I'd like to share with you is regarding an old trunk.

I was all of 5 or 6 when I first experienced this. I didn't know where the trunk came from, and hadn't even given it any thought when I was a kid, it had simply been mine for as long as I could remember....and I hated it, hated the "feelings" I got from it.

It's a big black metal trunk with a latch to lock it, but my parents never had the key for it. The inside of the trunk is covered in what looks like faded printed wall paper. I would keep baby dolls, barbies, doll clothes and other toys in this trunk. The trunk sat in my bedroom closet on the floor.  I was lucky as a kid, I had a huge double door closet, along with my own good sized bedroom.

It wasn't until just recently in my life after doing some research, that I discovered that the trunk is called a "steamer trunk", since it was used by people who traveled on steamer ships.  It dates back to the late 1800s to early 1900s.

I remember as a child, laying in bed at night and because of my fear of things I used to "see" I slept with two bedside lamps on in my room.

I'd be laying in bed trying to fall asleep and I would hear what I can only describe as muffled voices coming from within my closet. Of course I'd get out of bed to go tell my mom or my dad, and they'd investigate only to find nothing, telling me that it was simply my imagination or that I was dreaming. I would argue with them that it wasn't a dream because I had been wide awake when I experienced it! I'd get back into bed and within minutes of my parents leaving the room, I'd hear the voices again.  It would sound like muffled chatter, laughter and sometimes I'd hear faint music. There were times I'd hear the voices from within the closet, and I would lay in bed staring at my closet unable to move from fear, and would see the closet doors slowly opening, it scared the hell out of me and I'd run to my parents again, only to be reassured again that it was my imagination.

Sometimes I'd be brave and approach the closet, whip the closet door open only to hear the muffled sounds stop, yet I would get a very eerie, negative sort of vibe from the trunk, and I didn't like it, it truly scared me.

It felt like something negative was connected with the trunk, not necessarily evil, but more of a bad, negative feeling, like something bad happened.  I did not like it. I remember telling my mom "the trunk is evil", to which my mom would reply "how can a trunk be evil"?  Of course I could not give her a good reason, even as a kid I knew it didn't make sense, so I would simply reply with "well I don't like it".

One night it happened again, only when I opened the closet doors it didn't stop, and the muffled voices appeared to be coming from within the trunk! I threw the lid back and the noise stopped, and of course all I found in there were my toys. The very next morning I told my parents about it, and my dad suggested that the trunk be moved into the storage closet in the hallway, which I happily agreed to, so my dad moved it right then and there.

While the trunk was stored in the other closet I no longer experienced the muffled noises from within my bedroom closet.

Years later, when I was probably 16 or 17 I got to thinking about the trunk and the experiences I had with it, and tried to believe I was simply young and had a wild imagination, part of me told myself it was simply my imagination, but then another part of me argued that I knew damn well that I had experienced it. I had decided however, that I wanted to use the trunk to store some of my stuff in, so I had my dad move it back into my closet.

It wasn't until a couple of years ago I got talking with my parents about my experiences as a kid, and that old trunk that my mom said, "well, maybe it's haunted, we don't know the history of that trunk". I asked my mom, "what do you mean you don't know the history of the trunk" I had always assumed the trunk was my parents and then it became mine. My parents then informed me that years ago when I was only young, probably 2 years old; when they were Superintendents' of an apartment building, part of their job was cleaning apartments after tenants moved out, so that the apartment could be rented. It was during this time, an elderly lady from within the building moved out. My parents went into her apartment to get rid of any items left behind, such as unwanted furniture etc, so that they could clean the apartment and mop the floors. All that was left in the elderly ladies apartment was the trunk. In it was an old, large framed, antique black and white photo of two babies, and a dress. (see photos within this entry - close-up photo is posted to the top) My parents tried and tried locating the lady to contact her, but could not find any forwarding address, and did not know where she moved to. 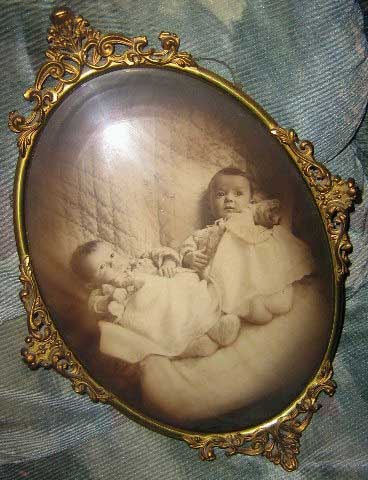 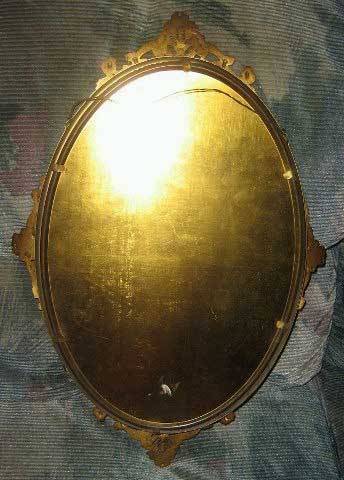 The back of the frame

The photo is in a large ornately styled metal oval shaped frame, with concaved glass. The back of the frame is metal, appears to be the original backing to it, and when you take the picture out, the photo itself is made of thick cardboard like paper. Doing research, I've discovered that the photo too is most likely from the late 1800s to early 1900s.

I still have that old trunk and don't feel scared from the so-called vibes that I get, but it's more of a very sad, heavy feeling.  I would really like to find out the history of the trunk but I guess I'll never know. Thanks for letting me share my story.

Our thanks go out to the witness for sharing these experiences, and photos with us. The trunk itself is currently in storage, and we will post photos when they are available. Update April 2010 please see next page for photos of the trunk.