Stress as an Altered State 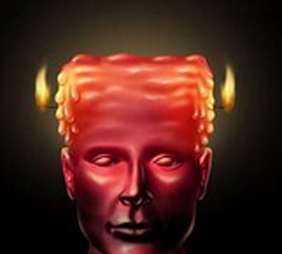 When looking at paranormal experience reports, a lot of people tend to only look to see the "cool" media-friendly effects of the experience.  Very few dig into the cause of it... in fact, as I've often said, the cause, for many people who look into ghosts and hauntings, is predetermined.  In their mind, what the ghost "is" is already established.  It's the spirit of {blank} or it's the energy from {blank} or any number of hypothetical possibilities is placed before us as already fait accompli and the only thing we must now be concerned about are photos, audio recordings, videos, etc.

In my own, and a fair number of people's opinion, the experience is real to those who have them, the effects are perceived... but the cause is the actual answer and the first step is to take a step backwards and try to find out why this happened to that experient.  After all, the actual scientific Holy Grail of paranormal phenomena would be not only reproducible events, but also experiences that are predictable and measurable outside of purposely induced hallucination or illusions.  (This is also helpful in potentially determining  whether the experience was external or something anyone in the room would have run into, or internal and only perceived by the experient who reported the event.)

So, find the cause, find the trigger, be able to figure out when or even if there would be a next time.

This is why one of the most valuable considerations is what the experient was doing, feeling, and generally "up to" prior to their encounter.

When ploughing through the reports, one notices a shocking (and noteworthy) amount of people experience things while either very relaxed or doing mundane tasks.  Doing dishes or vacuuming a carpet, perhaps reading a book or newspaper or napping (or trying to do the latter,) or otherwise involved with something they're not quite involved with... a task that engages some motor skill bits of their brain, but leaves other areas behind.  (This, of course, does not include looking at 'ghost hunters' or other people who were actively attempting to have an experience.)

There's a couple of obvious ways to look at this note... one is to consider that the person is alone or not interacting with another person or persons and is therefore more aware of their surroundings, and although that's a possibility, it's not always the case.

Talking with Sue Demeter-St.Clair about this, she noted that perhaps it's because the witness or experient is in a semi-altered state.  For lack of a better way of phrasing it, almost hypnotically induced by repetitive or activities that allow a portion of the conscience to rest, or partially switch off.

Removing, for now, the concept that somehow this engages or allows some unnamed/inexplicable 'energy' to activate or empower a third-party spirit or the like, which would be a difficult hypothesis to prove or disprove, and working solely with the best potential of tangible scientific results currently, you could surmise that either:

a:) A form of hypnogogia or hypnopompia is engaged and the person is in a semi-hallucinatory state.

Possible... but again, looking at the data, certainly would not be a catch all and would not explain multiple witness events.

b:) The altered state allows for potential psi in the form RSPK (Recurrent Spontaneous Psycho Kinesis) to become active.

Now, this is intriguing. Psi, for those unfamiliar, is the concept that all of us have a form of latent psychical ability that we have little or no control over and can manifest externally of the experient, (or very basically, 'we' create the phenomena unconsciously with our own thought-form energy,) and the hypothetical notion that psi and therefore potential RSPK may be more prevalent or pervasive (or ???) with subjects who are in altered states is not a new hypothesis and, when looking at things like experiences during stressful (and even manufactured stressful) times, there may be some weight to the idea.

With this groundwork established above, I was fascinated by a study which Sue brought to my attention.  Dr. Julie Beischel published a research paper in which she did a survey of people reportedly to be psychics and/or mediums. To really boil it down, (although I would recommend at least reading the linked article here for better details,) the majority of the people she had in her survey had autoimmune disorders. Also, statistically, a lot of the female subjects suffered migraines as well when compared to the average. Using the mainstream association between adult diseases, such as autoimmune disorders and childhood abuse and/or trauma, she plugged in those numbers with her subjects and the amount of people in her study that had experienced childhood trauma is "off the charts". Theoretically, her thought is not that mediums and psychics are set-upon, but that being set-upon potentially creates psychics and mediums. (I should point out that she noted that not all of her test subjects bore this out, but it was a simply a strong statistical ratio leaning hard towards the notions that psychics/mediums experienced abuse and/or trauma as children.)

Another way to look at it is indeed, many psychics/mediums (according to this study) are have experienced a trauma that is - effectively - still in active memory and would therefore be causing some form of fairly constant stress.

What is stress physiologically?

It's effects are both mental and physical and can manifest in ways that are not exactly easy to correlate.  Stress has the obvious signs, higher blood pressure, quick temper, stomach and digestive issues, and difficulty sleeping or relaxing and range from there up to physical tremours and sweating.  Stress is also is found to increase the time for healing from illnesses, to increase certain cancer developments, and even cause what might be considered psychosomatic injuries and illness that actually manifest physical effects.

Stress is a left-over function of a human's "fight or flight" instinct.   Basically, when pressed or feeling something dreadful oncoming, we're hardwired as animals to either prepare to physically battle that thing or run like heck.  (This is why the high blood pressure and "quick nerves" happen.)  The problem is that for most of us, we no longer have to worry about bear, wolf, or sabre toothed tiger attack... but that instinctual motivation is there and brings itself out for reasons that often can't be dealt with via fight or flight.

Bills, annoying noises, bad work environment, politics, philosophy... these can all cause anger or frustration, the body senses an issue, sends the signals to get ready to beat something up or show a pair of clean heels... but nothing.  It stalls.  All those chemicals, hormones, and whatnot with no place to go to spend themselves...  This is stress... and it's a given we're all under stress most of our lives in one sense or another.

Now, what if someone has faced a very stressful situation years ago that has been, more or less, dealt with.  There is no need to fight or flight now, but the memory of the event is very bad.  This, in its worst form, is post traumatic stress disorder... where the mere memory, both conscious and unconscious, can trigger very intense stress effects...

...but what about something that's almost as bad... but not quite?

...or something old who's memories are fading?

Would it be conceivable that the effects of this type of stress could be there, less intense then a full blown PTSD episode, but noticeable - when examined - to the person experiencing it?

What happens if, over years, that person with super-mild PTSD - again, consciously or unconsciously - develops coping mechanisms potentially psychological or even physically for dealing with the pains, aches, and even the occasional unwanted surges of adrenaline (fight or flight) without really concentrating too much?

One could say, with more than a little force behind the words, that this person is almost in a constant altered state, with a good portion of their brains working away to keep the effects from the memories subdued without them being even aware of it?

My thought with all this is...

Does the study by Dr. Beischel also show that maybe people in a form of altered state due to stressors lead to themselves being more likely to experience something odd more frequently... even on a seemingly normal cyclical day/mood/health situation?

If so, does that mean any of us could be psychically gifted provided we could somehow change our conscious state, even temporarily?  Could we, quite literally turn on and off our ability to experience something considered paranormal?

If this is the case, it may add fuel to the psi events = altered state possibility... and that is something most intriguing... especially in terms of what causes paranormal experiences.