In The Doorway Of A Burning Building

Canadian historian Christopher Laursen looks at the circumstances behind a famous photograph in which a ghostly girl appears in the doorway of the Wem Town Hall as it was burning down in November 1995.

In the doorway of a burning building
by Christopher Laursen

A few weeks ago, the North Shropshire Chronicle reported on the controversies surrounding the closure of the municipal hall in Wem, a market town located near the Welsh border 100 kilometres southwest of Manchester, England. The century-old building was destroyed by a fire on November 19, 1995, but was later rebuilt for £1.8 million ($3.6 million US). The local councils decided to move out of the building two years ago, much to the despair of local residents who watched as the vacant building fell into disrepair which, as one local resident put it, made it “look like a dustbin with windows.” For the local councils, the closure was a decision between keeping the town hall or the local swimming pool open, and via a questionnaire, North Shropshire residents favoured the recreational facility.

All the same, it is sad for any town with such a rich history to see a landmark fall into disuse. Wem has been holding its weekly markets since 1202, and is the birthplace of sweet peas first crossbred by Henry Eckford in the 1880s. During the War of the Roses in the 15th century, the entire town was razed by the Yorkists. Then the townsfolk, under Colonel Mytton, fended off Lord Capel’s forces during the Civil War in 1643. The Wem Town Hall fire of 1995 was the second large fire to have afflicted the town. In 1677, most of the wooden structures in the town were destroyed when a teenaged girl, Jane Churm, accidentally dropped a candle. According to Wem’s official website, “the intense heat partly melted the church bells, which had to be recast.” 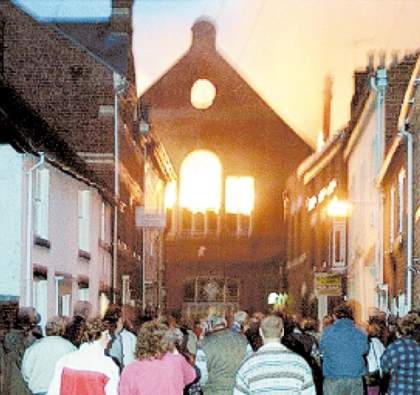 On that November night in 1995 when the Wem Town Hall caught fire, hundreds of townsfolk gathered to watch outside of a cordoned off area. Over 60 firefighters came to fight the flames, and although they managed to save much of the exterior of the building, the interior was gutted. The Shropshire Star reported that despite the massive fire, “a large plaque on the town hall entrance commemorating the Great Fire of 1677 had only suffered minor water damage.” Arson was ruled out, but no one was able to pinpoint the cause of the fire.

Standing across the street with his camera was local resident Tony O’Rahilly. He had a 200-mm zoom lens mounted on his camera, and was taking pictures of the scene of the fire from a safe vantage point.

Some time later, O’Rahilly had his black and white film developed and was astonished to find an unexpected image in one of the photographs. Standing in the doorway of the burning town hall is what appears to be the image of a young girl who O’Rahilly said he did not see when he was taking the photograph. This is a very unusual photograph indeed, notably haunting since the girl appears to be looking directly towards the camera, flames raging behind her inside of the town hall. No other picture with this image of a girl has surfaced. Who was this mysterious young woman? 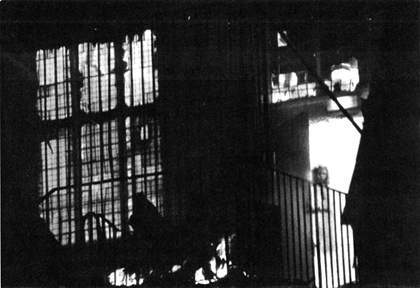 O’Rahilly immediately sent the image and negatives to the Association for the Scientific Study of Anomalous Phenomena, who passed it to Dr. Vernon Harrison, a former president of the Royal Photographic Society. “The negative is a straight forward piece of black-and-white work and shows no sign of having been tampered with,” the expert said. A BBC report on Dr. Harrison’s analysis added that “Dr. Harrison still considers himself something of a sceptic and suggested that the image of the girl may just be a convenient trick of the light - with smoke, flame and shadow creating an optical illusion at the moment the photographer took his picture.”

When the photograph surfaced publicly, many locals believed the girl in the photo to be the ghost of 14-year-old Jane Churm who had accidentally set fire to the town 318 years earlier. Stories of Jane returning to the scene of the Wem Town Hall fire out of guilt for what she had done spread widely. Some suggested that perhaps she was even responsible for the town hall fire.

With this publicity, local resident Richard Burnham carried the sceptical viewpoint further. He wrote: “Now, let me say that, as ghost pictures go, it’s a pretty good one. The figure stands out readily, and you don't need much of a leap of the imagination to see it…. It’s also not a clear fake, like the incompetent autopsy of the ‘Roswell alien’ or the ‘fairy pictures’ that deceived Sir Arthur Conan Doyle.”

In his layman’s analysis of the photo as it has been posted online, Burnham suspected that the face would have to be positioned in front of the railings, which would “not be compatible with the position of the body.” He questioned if the “body” that appears below the face is even a body at all. “In a big fire, there is a lot of stuff in the air: smoke billowing around, creating patterns of light and shade, debris falling from ceilings or blowing about in the hot draughts, sealed containers exploding and so on,” he wrote. “My guess is that the photographer has been very lucky to catch some of these in an instantaneous configuration that the human eye and brain find very easy to interpret as a human figure.”

In the end, this picture remains yet another piece of the unexplained. Was the image of what appears to be a ghostly girl merely a spontaneous capture of something, such as smoke or light, creating what appears to us to be a human standing at the doorway? Although not witnessed by any of the many residents watching the fire, was a flesh and blood young woman standing there? Or could this be yet another example of an apparition caught on film, even though it was not spotted by the naked eye, which has been the case in so many inexplicable ghost photographs? It is likely we will never find out for certain, but we can view this photograph with fascination for the possibilities it presents to us.

Do you think the explanation of Jane Churm being the girl in the picture accurately reflects historical fact or is it merely imaginative thinking?

It looks like the mystery of this particular photo may have been solved. Please see this article which describes how the image of the "ghostly girl" is identical to the image of a young girl in a recently discovered postcard that was stamped 1922.