Why Not An Animal Afterlife? 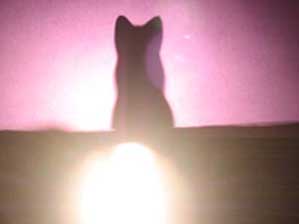 Christopher Laursen is a Canadian historian researching how people have related to the paranormal. In this article he offers anecdotes of animal apparitions and contact with pets after they died.

It is the dog returning, the same dog or a different one, a shadow dog I cannot clearly perceive, it has no definite form or color…

- Swedish poet Artur Lundkvist
from Journeys in Dream and Imagination, 1991

Like people, animals seem to be able to come through in many ways after they have died. A good friend of mine from Ottawa had a feline apparition that regularly bounded across her apartment’s hallway. She had lived in the century-old apartment building for nearly six years, and saw the shadowy cat a few times a year.

“Out of the corner of my eye, I’d see this black shadow zip across the width of the hallway. I used to write it off as shadows from the sun, but every time it happened, it was in the same spot, but at different times of the day.” Her immediate thought, whenever it happened, was that it was a black cat. “My first roommate said, ‘Oh yeah, I see it too. It’s our black cat.’ And we’d joke about it.” My friend received further verification from subsequent roommates who also saw the ghost cat. The greatest substantiation of what she saw came when a maintenance man was replacing the fire doors in her apartment. When he was done, he came to speak with her. He turned around, and then looked back at my friend. “Oh, do you have a cat?” he asked, describing a black cat darting across the hall. Having a visitor witness the phenomenon excited my friend, and she called her roommate over and had the mystified repairman repeat what he saw. Interestingly, he saw the cat from a different position than people would usually see it in the hallway. “It would never occur to you in the depths of your mind that it was anything other than a cat,” she told me.

Animal apparitions and afterlife contact is not all that uncommon. Famed medium Allison Dubois (who inspired the popular TV series Medium) wrote in her book Don’t Kiss Them Goodbye that passed on pets figure significantly in the readings she does. In one memorable reading, Allison saw a bird perched on the finger of her client’s recently departed mother-in-law, and the client confirmed that her mother-in-law’s bird died around the same time she did. “Although I knew dogs and cats crossed over,” Allison wrote, “I wasn’t aware that birds could come through from the other side.” Maybe everyone will be reunited with the pets they loved once they die.

My Mom certainly believes so. She recently recounted to me a variety of experiences that she agreed to share here. Her beloved collie, Katie, died this past spring from lymphoma. This was quite hard on my Mom who lives on her own. Over the past few years, two of her cats had died: Kitty and my own cat, Mookie, adopted by my Mom when I moved to Ontario. It was very sad for me to think of my Mom returning to an empty house every night after work and going for walks alone.

But she wasn’t completely alone, I later found out. A week after Katie died, my Mom heard two distinct barks in her house. “I know her barks like you would know your kid’s voice,” my Mom told me. “It was like her saying, ‘I’m still here, I’m okay.’” The signs continued on in the ensuing weeks after Katie’s death. Early one morning, my Mom awoke to hear Katie lie down in her crate in a room down the hall; the crate creaked as she did so. In August, my Mom heard the sound of Katie shaking out her coat in the sitting room. The audible evidence that Katie was still around the house was further verified for my Mom in several dreams she had, where she would be visited by Katie and find that she no longer had the lumps from lymphoma.

When I was younger, after my childhood cat Sylvester died, I remember lying on my parents’ bed on a warm afternoon. I felt what seemed to be Sylvester jumping on the bed, doing circles and resting on the bed near me. I just left my eyes closed. It made me smile. Of course, there was no cat on the bed when I opened my eyes, but I felt that Sylvester had curled up next to me one last time. My Mom has had such experiences as well. Maybe the most interesting experience occurred after Katie’s death in the wee hours of morning. She heard Katie come into her room, turn around to lie down on the floor beside her and smack her lips as if she were going to go to sleep. Then she felt her old cat Kitty come under the blanket (something her cat was prone to doing when she was alive). She reached her hand under the blanket and could feel Kitty’s tale and her rump. She felt Kitty sniff her hand. “It was like I was having a dream, but it was more than a dream,” she said. Whether this was a dream or something experienced while she was awake, the animals’ presence comforted my Mom.

“But what really blows me away are the actual things that have shown up in my house after Katie died,” my Mom said, recollecting how she had found individual pieces of Katie’s fur. “They seemed to come when I was most upset and needed to know that she was okay. The hairs would always stick straight out so I could see them.” One long collie hair appeared on her sweater, and another time, she found one on the upper part of her dining room curtain. Perhaps the strangest finding during this time was when she opened her clothes closet a few weeks after Katie died and found one of Kitty’s claws sitting on the carpet just inside the closet. This was especially unusual since Kitty had been dead for two years. I should mention that my Mom keeps her home meticulously clean.

My Mom recently adopted a new bounding spirit into her home – an energetic collie puppy by the name of Holly. No doubt the two will be watched over by those animals my Mom cared for who have since passed on.