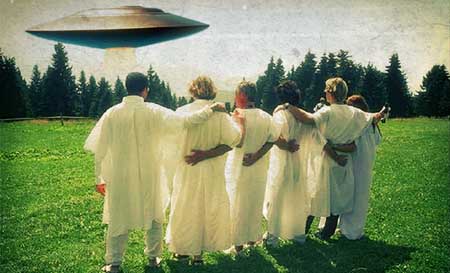 Some UFO-based religious groups’ concepts probably reflect anxieties about our present society and more specifically, the possibility of nuclear war or the general angst felt by those oppressed or otherwise “left out.” Other themes are the role of religion in a technological society, the need for peaceful international relations and the possibility of extraterrestrial visitation.

The message that the aliens are concerned that we are destroying our world is not new. In fact, it is a staple of contactee literature and has been since the 1950s. According to most early contactee groups, and copied word-for-word by the ET Disclosure movement today, the Space Brothers come from planets free from war, poverty and need. They also have achieved immortality through an emphasis on spiritual matters. In short, aliens exist in idyllic paradises much removed from terrestrial problems.

The Space Brothers also have come to Earth to stop arms proliferation and to prevent further war. Many early UFO religious cults were anticommunist but were paradoxically socialist in their structure. This was ironic, because both the FBI and CIA monitored the groups because they were deemed “dangerous,” often infiltrating the groups in order to keep watch on them.

Cult members’ fear of death is lessened or eliminated by the belief that the aliens will prolong their lives or reincarnate them on another planet. Some groups often made Jesus a spaceman, but still defined him as a true messenger who died trying to teach us truth and love.

Since Earth was not “ready” yet, the groups had to have human leaders to act as go-betweens. All groups shared their mission to educate mankind in order to save us from destruction. Hence, they sought public exposure in order to transmit their leaders’ messages. Today, as before, contactee groups’ leaders say they are in telepathic or “downloaded” contact with aliens, giving them special insight into the nature of reality.

Furthermore, it should be noted that UFO cults almost always promulgate a “Christian” philosophy of love, peace and reconciliation. Most have taught that we should be kind to one another, respecting all life and caring for the Earth. Many have strong environmental convictions.

However, by shifting their omnipotent deity from a spiritual God to a more technological entity, UFO cults place humans at par with their saviours. If only we knew enough science, we could be like the aliens. This path to enlightenment is one that is much easier than spiritual development, which requires somewhat more complicated things such as honest introspection, altruism and love for all.

Chris Rutkowski is a Canadian UFO researcher and science author. He is responsible for the annual Canadian UFO Survey which has been collecting and providing statistical analysis on UFO reports in Canada for over 25 years. .

Image Credit: The Ghost Files. Click on the ghost files link for further information on various UFO cults and the 1950s Contactees.