Legend tells of a large creature, called Lusca, lurking in “blue holes” throughout the Caribbean. Blue holes are basically vertical caves or underwater sinkholes and are common around the Islands of the Bahamas. They are on average 100-120 metres deep with a large circular opening.  The water in the opening of the oceanic blue holes appears cobalt blue in contrast to the surrounding sea water.

The colour of the water in the blue holes is due to the light waves of all the other colours being quickly absorbed by the water and only the blue light is transmitted all the way to the bottom and reflected back up by the sand.  Some inland blue holes are darker in colour and even muddy looking due to rotting vegetation in the holes.  The Island of Andros, in the Bahamas has over 170 inland blue holes and 50 oceanic blue holes.

Andros is the largest island in the Bahamas. The western side of the island is surrounded by the shallow waters of the Grand Bahamas Bank. On the eastern side, a large fringing reef runs along the shore line where water depths drop to around 35 metres, after which it drops off to a staggering depth of 1.8 km into what is called the Tongue of the Ocean. More sightings of Lusca have occurred in the oceanic blue holes around Andros than anywhere else in the Caribbean. Perhaps there is some connect between the blue holes and deep waters of The Tongue of the Ocean.

Lusca has been described as being up to 23 metres in length or larger. Some reports have indicated it may reach over 60 metres in length but these are likely gross over-exaggerations and are disputed according to some scientists.  Witnesses have described it as being a multi-headed animal, or a shark-octopus cross. Many scientists speculate it is a giant octopus or perhaps even a giant squid. The numerous tentacles of a giant octopus or squid may be the source of the multi-headed version. Below is an image of the reported shark-octopus combination. 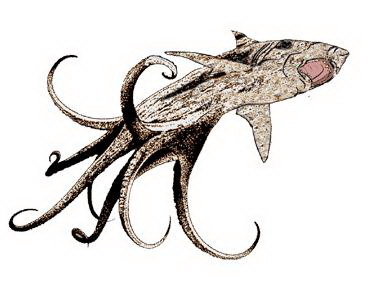 Native islanders say that the animal comes to the surface at night in search of prey and is said to be responsible for the disappearance of cave divers that have entered into the blue holes and never returned (Michael Newton, 2003).  Cave diving is very dangerous and divers have died in these blue holes but mostly due to inexperience and improper equipment. Lusca is even said to have snatched hapless victims right off the beach and drag them back into the blue holes.

Most of the blue holes are largely unexplored according to Kenny Broad (University of Miami).  Recent exploration by divers for National Geographic have found many fossils in these blue holes, a shell of an extinct sea turtle, a new unknown bird species, a fresh water crocodile thought only to exist in Cuba, and even human bones from ancient Lucayan people that may be from the 1500’s.  This environment, according to Brian Handwerk from National Geographic, “is ideal for preservation, because the salty, oxygen free waters keep bacteria and fungi from decomposing organic remains.” Even boats have been found at the bottom of some of these oceanic blue holes. But, no evidence of a giant cephalopod, or any other large creature, has been found in any of these blue holes.

Witnesses describe a large swirling motion or water bubbling underneath prior to an attack and then the creature sucks down its hapless victims.  Blue holes have steep walls that run down and open up into elaborate tunnels and caverns which connects them to each other and to the ocean through various means. As such, they are influenced by tidal action.  Most inland ones experience a rise and fall of water but no real current is generated. Oceanic ones have particularly strong tidal pulls, on an outgoing tide the surface of the water will give the effect of water boiling up (the “blow” action) out of the hole. On a rising tide the pull of water into the hole can be very strong, creating a swirling or whirlpool action on the surface (“suck” action).  It is this tidal action that is believed to be the source behind the myths of the animal attacking swimmers and drawing boats into the blue holes and then spitting back out the wreckage. Yet, it still does not explain the eye-witness accounts of tentacles sweeping people off the shore.

Intrigued by the mysterious sightings of Lusca, members of The Skeptical Viewer sent divers down to investigate a blue hole in Andros.  Their boat captain, Peter Douglas and another boat captain, Rufus Tymur both claimed to have personally witnessed Lusca. Douglas described Lusca as “brownish-gray in appearance and about 40-50 feet in length.” The creature was said to emerge from a blue hole long enough for Douglas to see its tentacles then withdrew back in.

In The Skeptical Viewer summary report, dated September 20, 2009, they mention two readings on the sonar. The first appeared initially as part of the cave wall and was large but they do not give any details as to what happened. I speculate that this “part of the cave wall” may have moved and it was of significant size. This could easily have been a large octopus as it does fit with their behaviour of camouflaging themselves to fit into their environment. Octopus can change colour and texture to match their surroundings and can squeeze into the smallest cracks and crevices. Lusca has been said to be able to change colour.

Secondly, they report “something of great size has gone through the tunnel” referring to one of the tunnels that a diver was in. They dimmed the lights aboard the vessel they were on “so as not to attract the attention of whatever is moving close to their small boat.”  To bad, as they might have seen what they were tracking and the mystery might have been solved.  A review of the footage they shot revealed what might possibly be a tentacle, but it is not definite. This has led the team to speculate that Lusca may indeed be a large cephalopod or possibly a large eel. I attempted to contact this group for more details but never received a response. As a side note, the diver returned safely to the boat and never saw any large object in the water.

So, what is Lusca? Without going into all the details, a combination of an invertebrate and a vertebrate together would be unlikely due to physiological limitations imposed on the animal. Most scientists, as mentioned, believe the reports are based on a giant cephalopod. A giant squid is discounted as a possible source of the sightings as the water in the blue holes is not that deep, compared to the deep water giant squids are usually found in.

So at this point, it seems the evidence points to a giant octopus. The History Channel reported that if Lusca existed in the reported size of 60 metres, its beak would be over 1 metre in diameter. Is this giant beak the source of the supposedly “shark head portion” of Lusca? Do giant octopuses even exist in the Bahamas? Until recently, the answer would likely have been no!

On January 18th, 2011, evidence for the existence of a large octopus was discovered and reported by G. Noel in the Freeport News. A piece of octopus (beak and part of the head) washed ashore on Grand Bahamas Island. Dudley Bethel, an experienced fisherman, estimated from the size of the beak, the octopus could be 20-30 feet in length. This was supported by Clement Campbell of the Department of Marine Service.

Campbell also stated that this was the second report in six months of a large octopus. Local residents saw a 12 foot, 135 lb octopus floating at the surface in July, 2011says Campbell. No details were provided for this specimen.  Since it was “floating” and not swimming and it was during the day, it can be assumed it was dead, in particular since measurements were taken it. A living, 12 foot octopus would unlikely be cooperative in getting his vitals recorded.

How common are these large cephalopods in the Bahamas?  No one knows as this is the first time such specimens were found. How large do they get?  Know one knows at this point and time. The giant octopus in the Pacific (Enteroctopus dofleini) is considered the largest octopus and there has been reports of it reaching 272 kg (600 lb) and having an arm span of over 9 m (30 ft). The average size is said to be around 5 metres, closer to the floating specimen found. So, it is possible for giant octopuses to exist in the Bahamas.

Despite its large size, the Pacific octopus only has a life span of only 3-5 years which is still longer than most octopuses. Adults die soon after breeding, males first and the females after the eggs hatch. Do these giant Caribbean octopuses have similar life spans? If so, multiple octopuses would have to be present over the years to account for all of the sightings and most likely, in multiple holes.

So, the evidence available seems to indicate that a large octopus is the source of Lusca sightings. But no one has seen one in a blue hole, although this does not mean they do not exist there. It is unlikely that the octopuses are breeding in blue holes given the anoxic environment at the bottom of these blue holes (due to anaerobic bacteria) and slow water exchanges in these holes.  Female octopuses tend to their eggs and ensure adequate water circulation over the eggs. This maternal behaviour would likely increase the chance of someone discovering a female tending to her eggs.  The strong tidal currents in some holes would also not make a very ideal area for these eggs.