The Mystery of the Great St. Augustine Sea Monster 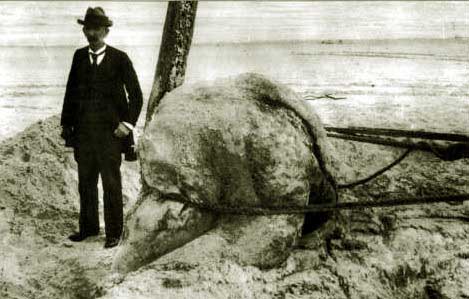 Throughout 1896, newspapers reported various sightings of sea serpents and sea monsters. Sightings of such monsters go back to biblical times and its descriptions of a leviathan. Sightings in the North Atlantic go back at least to 1734 when a Danish missionary to Greenland, Hans Egede, reported:

“[T]here appeared a very large and frightful sea monster which raised itself so high out of the water that its head reached above our maintop. It had a long, sharp snout, very broad flappers and spouted water like a whale. The body seemed to be covered with scales, the skin was uneven and wrinkled, and the lower part was formed like a snake.”

The missionary estimated that the serpent was 150 feet long. And yet again, a Norse seaman named Kopper reported:

” In the latter end of August, 1746, as I was on a voyage on my return from Trondheim, in a very calm and hot day, it happened that when we had arrived within six English miles of Molde, as I was reading a book, I heard a murmuring voice from amongst the men at the oars (who were eight in number), and observed that the man at the helm kept off from land. Upon this I enquired what the matter was, and was informed that there was a sea-snake before us. I then ordered the man at the helm to keep to the land again, and to come up with this creature, of which I had heard so many stories. Though the fellows were under some apprehensions, they were obliged to obey my orders. In the meantime the sea-snake passed by us, and we were obliged to tack the vessel about, in order to get nearer to it. As the snake swam faster than we could row, I took my gun that was ready charged, and fired at it. On this it immediately plunged under water. We rowed to the place, where it had sunk down, and lay on our oars, thinking it would come up again to the surface. However it did not. The head of the snake, which it held more than two feet above the surface of the water, resembled that of a horse. It was of a grayish color, and the mouth was quite black and very large. It had black eyes and a long, white mane that hung down from the neck to the surface of the water. Besides the head and neck, we saw seven or eight folds, or coils, of the snake, which were very thick, and as far as I could guess, there was about a fathom’s distance between each fold.”

Off the coast of New England, the most famous example of a sea serpent was the Great Gloucester Sea Monster of 1817 found off of Cape Ann and seen multiple times since then. . The monster was recently observed on July 7, 1960 by Captain Ellis Hodgkins and a party of seven aboard his charter boat, Julyntha. The monster was estimated to be seventy feet long. In 1970, a giant sea creature washed ashore Scituate, Massachusetts, at Mann Beach. Scientists now tell us it may have been a basking shark.

Nor were such sightings limited to New England. It has been reported that Captain Cook’s HMS Endeavour in the South Pacific was attacked by a sea serpent that had to be beaten off by the crew.

As noted, newspapers in 1896 were awash with reporting of sea monsters. The Philadelphia Inquirer in the summer of 1896 reported that Captain Voss and the crew of the Belgian steamer Sagamore observed a sea serpent off Cape Hatteras. The serpent, according to Voss, was northbound making an estimated 10 to 11 knots.

“The monster was a ferocious as a tiger, and bit and snapped the gaff stick in pieces, and when hauled on the beach rushed back over the sands with the 100 feet of line and swam out to sea as far as it could go. The reptile was seventeen feet long and as big around as a man’s body, and has every characteristic of the snake except the head, which is much like that of the pugnacious bulldog. The under jaw is heavy and covered with skin, the eyes are as large as a man’s and as bright, and will follow the movements of a person as closely as the eyes of a cat follow a mouse, and without the animal ever moving its head.

The general color of the serpent is darkish blue, with spots much like those of a rattlesnake, the spots fading out into lighter blue at the circumference. The skin is smooth like that of the snake. The monster is finned much like the halibut, having a long dorsal, very thin, running down the back, while underneath there is a similar fin, but only near the caudal extremity. The animal’s jaws are set with rows of sharp teeth, like those of a cat, and the great strength of the jaw enables it to sink its fangs to the base in a stick of wood.

“In the water, they say, the reptile looks larger than it really is, and from this fact lies much of the exaggeration from those who claim to have seen sea serpents.”

Earlier on February 7, the Call reported that an Italian fisherman had caught a sea serpent in Monterey Bay and had exhibited the creature in town.

And again, the Washington Times, September 1, 1896, reported that on May 28, 1896, The captain and crew of the Tam O’Shanter out of Portland, Maine, bound from Hong Kong to New York, observed an entire school of serpents of the coast of Borneo in the passage between the China and Java Seas. It was not the only time that an entire school of such creatures was reported. The St. Louis Post Dispatch noted the existence of sea lizards which dwell in the Gulf Stream between the Bahamas and Florida. The lizards rather than having front legs, according to the paper, had “two broom shaped fans and from about the middle of the body, including the tail, there are several more fins that spread out like a fan.”

Many such reports were regarded by some with suspicion. Several cynical writers observed that the monsters had a wonderful sense of timing and always seemed to surface during slow news periods when Parliament or Congress was not in session.

Nevertheless, in November 1896, two boys bicycling on the South Beach (present-day St. Augustine Beach) observed the carcass of a sea monster washing ashore. It was reported to Dr. Dewitt Webb of the St. Augustine Historical Society who undertook an investigation. The monster was described by a South Beach hotelier:

“The head is as large as an ordinary flour barrel, and has the shape of a sea lion head. The neck, if the creature may be said to have a neck, is of the same diameter as the body. The mouth is on the underside of the head and is protected by two tentacle tubes about eight inches in diameter and about 30 feet long. These tubes resemble an elephant’s trunk and obviously were used to clutch in a sucker like fashion any object within their reach.

“Another tube or tentacle of the same dimensions stands out on the top of the head. Two others, one on each side, protrude from beyond the monster’s neck, and extend fully 15 feet along the body and beyond the tail. The tail, which is separated and jagged with cutting points for several feet, is flanked with two more tentacles of the same dimensions as the others and 30 feet long. The eyes are under the back of the mouth instead of over it.”

At first, it was believed merely to be the head of a sperm whale. Later it was proclaimed by Yale Professor Addison Emory Verill to be a new species of giant octopus which the professor proceeded to name after himself even though he had never viewed it.
Later investigations have been undertaken by learned individuals from the University of Florida. Some have confirmed that it was a giant octopus; others and the most recent saying that it was a very large piece of whale blubber with a portion of the whale hide still affixed.

Geoff Dobson, a St Augustine resident for the past 33 years, is a western and Florida history writer and was former General Counsel for the Florida Department of Transportation. He is a former president of the St. Augustine Historical Society and a regular contributor of nostalgic memories to Historic City News. Before his parents moved to Florida, his father was a Black Angus cattleman. Geoff has written extensively on Wyoming history (“Wyoming Tales and Trails”). When Geoff was in high school, his family lived in the cattle country of eastern Sarasota County. The family spread, which his parents called “Wild Cat Slough,” was reachable only by a pair of ruts over the sand hills and through a snake and gator infested slough. Now, it is an area of four-lane roads, expensive subdivisions, shopping centers, and office parks. . His undergraduate degree is in history. Geoff received his post-graduate degree from the University of Florida. He may be reached at horse.creek.cowboy@gmail.com

Republished here with permission. We would also like to thank the author for the use of the additional images seen here. Originally published by Historic City News