Beyond The Highgate Vampire

A review of the book Beyond The Highgate Vampire: A True Case Of Supernatural Occurrences and "vampirism" that centred around London's Highgate Cemetery By David Farrant 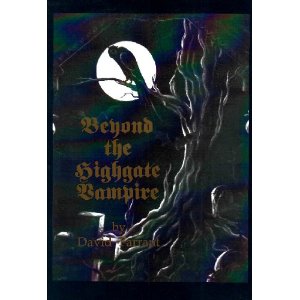 I've loved vampire lore long before I became a psychical researcher, which I sometimes jokingly blame on my Transylvanian ancestry. Count Dracula is arguably the most famous fictional vampire, but in reality the case of the Highgate vampire is one that lives on in infamy. Not only is Highgate's vampire based within actual accounts of a potential haunting, but its very setting in an ancient, and neglected cemetery really makes it rather irresistible to contemplate. There is also some evidence that part of the fictional Dracula story may have been inspired by an actual incident at Highgate in the Victorian era.


Through the years I had come across a few different accounts of the events that unfolded during the late 1960s-70s in Highgate cemetery. Many of these write-ups included descriptions of Satanic rituals, magical duels, and would-be vampire hunters complete with stories that reminded me more of something you'd see in a horror film than any semblance to reality. Added to what seemed more sensational than true, were reports of vandalism not only to the cemetery, but actual corpses. Quite frankly much of what I had learned made the story appear a farce with some tragic consequences for both the cemetery and future visitors.

My husband was fortunate enough to visit in 1995, and at that time visitors were very restricted in when and where they could go within the cemetery, and staff were perhaps understandably not very forthcoming in wishing to discuss the "vampire."  With no plans to visit the cemetery myself in the near future I had put the Highgate case out of my mind for a long time, until by a bit of luck, I found an online group devoted to the cemetery and the vampire legend. I had some trepidation at first, but I joined in the hopes that maybe through all of the chaff I had come across in the past regarding this case there might be some wheat, and that maybe, just maybe, there was something to the "vampire story" after all.

Through The Highgate Cemetery Vampire Appreciation Society I learned of David Farrant's book Beyond The Highgate Vampire. David Farrant is the President and Founder of The British Psychic & Occult Society or B.P.O.S for short. He is also one of the main and original players in the vampire saga. With my hopes up I took a chance and ordered a copy through the author's website. I was not disappointed.

Beyond The Highgate Vampire is based on the author's personal involvement in the case, which gives it a unique perspective from someone who was actually there at the time the events were occurring. The book (to be fair more a booklet at 43 pages) also includes some of the author's own photos.

David's narrative has a sincerity that frankly I find lacking in many other accounts. I find his experiences with the press dishearteningly familiar as I too have seen how the topics we cover are often sensationalised and how media will take a simple sound bite and manipulate it to a point that makes us look loony. It is sad in my opinion how a young man obviously not overly media savvy at the time was caught up in media frenzy and ultimately paid a price for that. While the author does not go too much into the troubles he had with the law and subsequent court cases, he does give mention to the fact he was acquitted of charges levelled against him for vampire hunting in 1970.

The first part of the book details the B.P.O.S investigation, and eventual media hoopla, and its outcome. The second part gives us insight into David's spiritual beliefs as a practitioner of Wicca with a brief overview of what that exactly is, and how that too has been often misrepresented in pop culture. This latter half is important to our understanding of what the author believes may in part have actually occurred as events began unfolding at Highgate. The book concludes with some other local cases very similar in description to the vampire, and some very intriguing speculation and food for thought.

As an afterword some quotes from a different book on the subject The Highgate Vampire, by Patrick Sean Manchester are included in order to give some balance and a very different perspective, and conclusions to the events at Highgate cemetery.  Considering the history between these individuals I do think it was also a classy thing to do.

As stated above I ordered this book directly through the author's website here: http://davidfarrant.org/ The book was very reasonable priced, shipped the next day and arrived 5 days later from England to Canada. Included with the book was a handwritten note from the author and a photograph. I would personally recommend ordering directly through the website I've linked to. My only regret was that I did not ask the author to sign my copy before shipping.

If I have any complaint about the book, more a compliment really, it is that I would have liked a longer version. The author has a good writing style, it was a fun read, and the subject matter is of course compelling. I do believe that I now have a much more clearer idea of what went on all those years ago and what the "vampire" may have actually been. Thank you David Farrant for sorting through that chaff to get at the wheat and giving us your personal insights into an infamous "real" vampire story.

A great addition to any paranormal researcher or enthusiast's library!