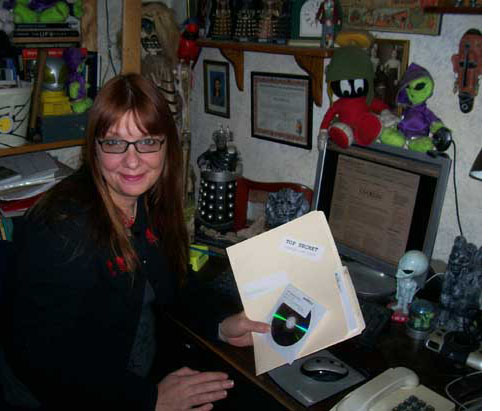 The Conspiracy Show with host Richard Syrett, is a Canadian documentary-style television program that is a companion to the host's popular AM740/ZoomerRadio broadcast. Topics that are explored, and investigated include the paranormal, UFOs, and conspiracy theories from around the globe. The show will debut on Vision TV February 18th at 11pm  ET/ 8pm PT

I was fortunate to receive an advance screening of the first two episodes of The Conspiracy Show, and what follows is a review and my thoughts on these initial episodes.

Episode One concerns itself with UFO Disclosure, and looks into the current movement that is attempting to facilitate that disclosure by bringing awareness to the UFO issue, and thereby putting pressure on world governments (in particular the USA ) to open up to the general public about its information on UFOs and UFO occupants, and to end cover-ups. I  found the show to be quite balanced, and informative. The ending of the show about UFO conspiracy was truly refreshing in the fact that Syrett gave his honest view and opinion on the subject.

Too many other presenters or hosts on other shows, be they on the radio, internet, or in this case, on television, either feel they need to show a sense of faux journalistic detachment and keep their own opinions or thoughts obfuscated (or masked under clever jokes or attempts at wit) or they appear to outright lie about their own beliefs in order to appease their audience, and in so doing, come off about as honest and legitimate as the worst of any carnival barkers one might encounter at a circus side-show.

This said, Syrett's "summing up" (presentation at the end of his own thoughts on the subject) seemed genuine, and presented authentically without any obvious taint to the data presented throughout the show. Both sides were presented, and Syrett favoured neither during the show, but at the end, we find out his own feelings... and that was a nice experience.

Episode Two entitled 9/11 Controlled Demolition was by the very nature of the topic presented potentially much more emotionally charged, and was handled as equally well as Episode One in my opinion. Founding members of Architects and Engineers for 9/11 Truth and Firefighters for 9/11 Truth were given equal time with an explosives expert who argued against their claims that the World Trade Center towers were brought down by controlled explosions. Again both sides were presented thoughtfully, and the viewer is given the opportunity to evaluate the evidence presented, and make up their own mind on what really happened that fateful day.

I have a well known reputation for being critics of this type of programming. My critical eye is borne out of our sincere desire to see these topics elevated, and treated respectfully. If these first two programs are any indication, then The Conspiracy Show has achieved just that.

The production presented the data in an easy-to-watch way, without silly dramatics or feeling the need to "sex-up" the subject matter to appeal to what many in the media industry mistakenly thinks the target audience prefers to watch.

I would like to congratulate Richard Syrett, and the production team on this intelligent well done program. And we hope to see much more of The Conspiracy Show in the future.

For more information please visit the official website for The Conspiracy Show.

Richard examines the growing worldwide UFO Disclosure movement and their efforts to pressure the government to tell the public the truth about UFOs and aliens and their case that they insist proves UFOs and ETS are real.

Richard speaks with the founders of Architects and Engineers for 9/11 Truth and Firefighters for 9/11 Truth who present their case that the World Trade Center towers were brought down by controlled demolition on 9/11. A Fire and Explosives expert refutes their claims.

Richard investigates the practice of past-life regression therapy, a technique where subjects are placed under hypnosis in order to recover what practitioners believe are memories of past lives.

Are We Running Out of Oil?

Richard investigates the claim that the true nature of oil has been kept hidden from the general public. Two proponents of the abiotic oil theory argue that oil is not a fossil fuel and is in near inexhaustible supply. A researcher and author of a book on peak oil argues that the earth’s supply of oil is already in terminal decline.

Richard travels to the field to meet several researchers who present evidence that suggests chemicals or biological agents might possibly be deliberately sprayed at high altitudes for a purpose undisclosed to the general public.

Who is the Final Anti-Christ?

Richard interviews several researchers in the field of End Times Prophecy who offer clues as to the existence and identity of the Final Anti-Christ. A former occultist turned Christian denies any scriptural basis for the existence of an Anti-Christ

Richard speaks with victims of alleged electronic harassment, the supposed use of electronic devices to harass, torture, and/or physically harm a person. Some victims allege that the government is behind it. Richard also speaks with a private investigator who specializes in electronic counter measures and a social psychologist who dismisses such claims as fantasy and paranoia.

Richard delves into the religious practice known as exorcism and investigates what a board certified psychiatrist has described as ‘an authentic case of demonic possession.

Richard examines an array of variants on a widely held conspiracy theory that a powerful and secretive elite with a globalist agenda is conspiring to eventually rule the world through an authoritarian world government. Evidence is examined and skeptics engaged.

Richard speaks with two whistleblowers who claim to have been part of secret government time travel projects, including a lawyer who claims as a child he was sent back in time to witness Lincoln Gettysburg Address. An experimental physicist provides a skeptical perspective.

Richard speaks with several of the key witnesses to a UFO landing at a U.S. Air Force Base in England in 1980, one of the best documented cases on record: Several of the alleged eyewitnesses, a preeminent investigator of the incident and a skeptic tackle the subject in field.

Richard speaks with several independent researchers about their claims that a powerful, secretive cabal of international bankers is attempting to control the course of history and enslave humanity through their monopoly of the creation of money and the manipulation of the money supply.

Richard examines the folklore of the vampire and investigates the possibility that demonically reanimated corpses may in fact exist. Interviews include a well-known U.S. Paranormal Investigator and travels to London (UK) to interview an Anglican Bishop who claims to have destroyed several vampires (in the field footage).