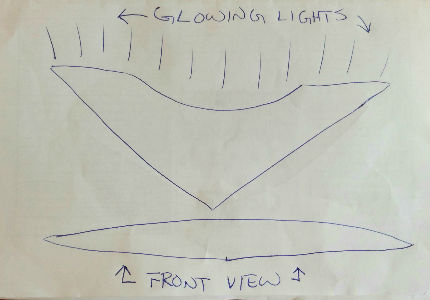 ufo details report: This happened back in 2006 on Gordon's reserve.I was smoking a cigarette behind my house on the deck when I noticed an object flying towards my direction. At first I thought it was a plane but than I noticed it was flying too slow and low to be a plane. As it got closer I could see it was made no sound and the colour was black,it had no tail wing either. So called my girlfriend at the time to come out and take a look for herself. I asked her if that looks like a plane and she said "no". I told her to go grab the camcorder. I tried to turn it on but the *battery was dead. Then it made a turn to my left and as it did we could see a light behind it that glowed right across the whole " ship". Then it started to climb.it just kept rising towards the atmosphere until all we could see was a small tiny light,then it was gone. this happened broad daylight,no clouds at around 2 pm. I told her not to tell anyone because they will think we're crazy.but she did after a few years because she said she couldn't keep it to herself anymore. I told some people myself after awhile.

In follow-up the witness added: "That's not the only time I've seen something strange. 2011 new years eve we saw a huge red glow in the bush by LA Loche,Sask. It was high as a tree.it faded away and came back on again. I was so scared I started driving faster just to get out of that area. "

*Webmaster's note: Batteries draining is a feature reported in some paranormal encounters