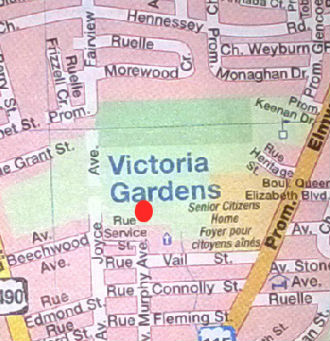 "On Wednesday, July 29, 2015, at around 9ish pm, while coming up from the basement of my employment in Moncton NB, I noticed through the window of the door just in front of the stairs, a very bright, white rectangular-like object in the sky that wasn't moving. It was too bright and large to be just a star.  It was a clear evening with some light left.

I went out to look at it better and noticed 3 more similar objects, seemingly equally distanced apart, to the left of the first object. 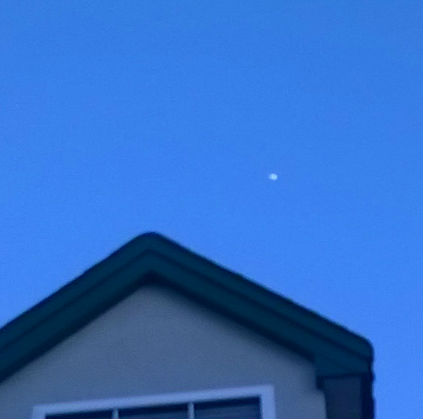 A photo taken by the witness. It is impossible to tell from the photo alone what this may be. 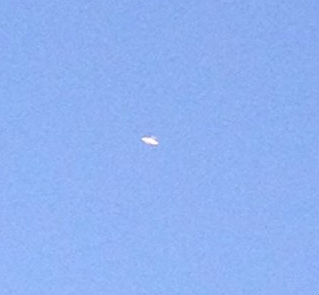 Another photo in a series taken by the witnesses. Again its impossible really to say what this based on the photos alone.

The other 3 however seemed less large and less bright farther out they were from the first one.  One of my coworkers was out on a break and asked what I was looking at.  When I told her I thought I was seeing UFO's, she came to look with me.  The 4 objects, we finally noticed,  were moving extremely slowly to the left all at the same time, in a row.  Then the farthest, smallest, less bright disappeared leaving only 3 visible to us.Then all of a sudden from the left, the direction where the other had disappeared, came something, either the disappeared one or another, racing back toward the others.

It finally stopped underneath one of the other objects and stayed for a while. At some point, I saw one of them seemed to have a thick red horizontal line down it somewhere plus one blinking red light.  All the others were just white.  Then from one of them,  going to the right, we saw smoke coming out the back, following it.  None of the others had smoke.  Not even the first one we saw coming back from the left the first time.  So not sure how many there were and not saying they are extraterrestrial, only that we saw objects not recognizable by us as a plane or helicopter, no sound as you hear from planes or helicopter or the so called chemtrails from planes that stay for minutes to hours before disappearing.

They must have been visible for about a half hour or so since I first began seeing them. Having to return to my work I did not see them disappear.  There was another co worker who joined us to watch and three of our residents also saw them.  I am curious to know what they were but am not sure  how to go about finding out.  I have sent a few of my best pictures taken from my cell phone however they only show white lights in different positions.  The 3 darkest sky color are from my cell phone camera and the lighter sky color comes from my co worker.  The interesting thing to us was when she zoomed hers the rectangular object seemed round and had a dome.  However we do realize that zooming and reflections could distort the actual image.  Is there any way we can find out if anything went on in this area at around this time?  Thanks."

"Rereading my story I noticed an error.  The thick red line I saw on one of the objects was in a vertical position, up and down, and not horizontal like I wrote.  It was the 4 objects that were in line in a horizontal position.  Also, after leaving the back yard at some point I went up to the second floor balcony in front to see if I could see anything and there were 2 of the very bright objects there in the sky.  Not sure if they were different or 2 of the same we had seen in the back.  I tried photographing these however for some reason I was not able to locate them through my cell phone camera.  I would appreciate any information you may have.  My co worker and I were really amazed and curious by what we saw.  It was definitely UFO to us as we couldn't recognize the objects as planes or helicopters and they should have been close enough for us to see that.  Also no sound was heard which we also believe we should have heard at their distance at least the larger ones.   Someone suggested drones.  I' ve heard of these but not sure exactly what they are or size and sound if any."

"I may have some additional information.  I went to my friends house to check on what he had seen on facebook and I believe everyone saw the same thing.  We're just not sure what it was.  I wrote down some of the info to share with you. The facebook group is called Moncton scanners, debate and a little humor.  On July 29 at 8:50 pm she wrote that a friend told her she saw about 20 planes take off from North of St Andrews, within 30 minutes, all the same type.  Someone else commented if they were white and red.  I saw only one that was white with a red line.  Someone posted a picture that looked like mine.  Another post mentioned the route they took, which to me looked like a circle with red arrows.  Someone in Moncton I believe mentioned seeing 5 in a row at around 8:30, same plane, same direction.  Another saw 4 overhead in Dieppe.  Another mentioned no noise, neither did we hear any, and he thought maybe it was a jet aircraft (?).  He said he called a friend who worked at the airport and that his friend didn't know anything. Someone else said they saw 5 fly over Rogers road and someone else mentioned seeing 16 within 30 minutes.  I'm not sure how they were able to identify them as planes because we certainly couldn't.  Even the 2 larger, closer ones I saw while on the balcony I could not identify as a plane.  And I'm sure I have recognized planes and helicopters at much farther distances.  What you saw in my pictures is basically what we ( my co workers and I ) saw.  But perhaps they just said they were planes cause what else could they be?"