UFO details report: I stepped outside to my back deck to have a smoke and saw 3 strange lights in the sky. They were blinking in a diagonal pattern. After I realized it was not a plane I got my camera out and wound up taking a short video as well as some photos. The object/objects moved strange and it went from being diagonal to a triangle shape. I did contact my local police department and notified them but by the time they got here it was over with. It lasted a good 20 mins. The officer saw my video and photos and was not sure either what it was and stated there wasn't much they could do. I just assured him that I wanted to make authorities aware because of the lack of knowledge with the object. Here is the link to the video on youtube and I can provide photos upon request.

Here are the photos that I took. I wish I had my camera in focus better when I did it but since I didn't know how long I would be seeing them I just winged it. If it helps I use a canon t5i with the standard lens that comes with it. No flash was used at all. I had it at like a 15 second shutter I believe. The video wasn't the greatest since I didn't have a good zoom but you get the gist with it. After I stopped the video I set up on tripod and started taking the photos. They were moving odd but I did notice with the photos that after it went from that diagonal stance it was in to the triangle more or less in the photos it almost looks like it is rotating around. Before it started to move like that I had thought it was a solid object but then after I was not so sure.

I did make a report with the Moncton Police regarding what I had saw. They of course didn't come till an hour and a half later but I showed the officer my photos and video and I think it even caught him off guard. Probably thought I was seeing things or something before that. I usually go out in the evenings and do star photos and such and I had never saw anything like that before. I have saw strange single lights in the sky, nothing with multiples. I did notice the next evening though there was a helicopter in that area with it's search line on hovering around the same area I was seeing them strange lights. My daughter called me back out after and said the helicopter was back there again. So maybe they know something I don't. I am not sure. I put one of the photos on weather network as well asking if anyone else had saw them. I mean they were doing that for a good 20 mins. I couldn't of been the only one. They weren't extremely bright like if it was a single one you would of thought it was a plane but the movement and the lights seemed to follow like a runway pattern is what threw me off. Hopefully you are able to uncover some information on what that could of been. I have been curious about it since. 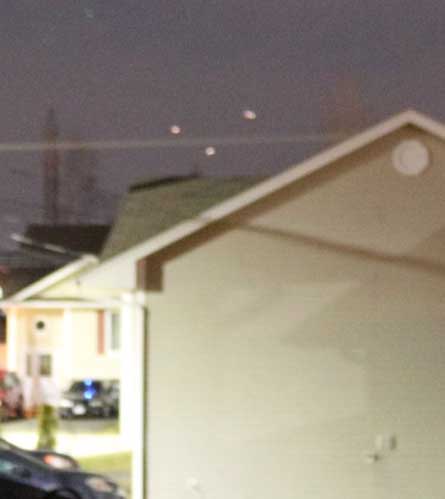 Please click on these additional links for larger images that will open in a new window:

Our thanks goes out to the witness for sharing this experience video and photos with us. If you have seen something similar at this date/time/location, can add further information to this report, or have experienced something that you believe may be a UFO please contact us at admin@psican.org or fill out our reporting form here http://psican.org/alpha/uforeporting.htm Your privacy will be protected and confidentiality is assured.