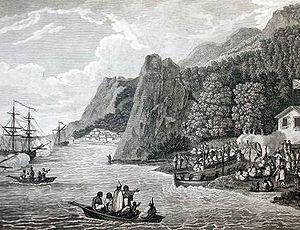 Between 1788-89 the British sea captain and trader John Meares used Portuguese-flagged ships with English crews to establish a trading post on Nootka Sound from which to engage in highly profitable fur trade with China. During this time Capt. Meares recorded an oral tradition told by the West Coast natives of the visit of an "extraordinary stranger" in his "copper canoe." Some UFOlogists believe that these types of oral traditions are suggestive of what may be ancient Native recollections of visits to Earth by extraterrestrial beings, in spacecrafts, and should be included in Canadian UFO lore.
Image Credit:  Ships of Meares arriving at Nootka Sound in 1788 Wiki Public domain