Japanese folklore is filled with kwaidan - ghost stories - and there is no lack of intriguing characters that populate these tales: half human, half animal beings; mischievous shapeshifters (henge); giant ogres; inanimate objects coming to life; masked spirits; and many more. Often, these fantastical beings are visually depicted in old Japanese block prints, but they also have come to life on the big screen in recent years.

For those not well versed in Japanese folklore, it can be tricky to follow these films, but after awhile, you start to see some common characters, storylines and themes. A bit of reading up on the various yokai online is good preparation to understanding some key characters and the stories behind them. Many of the characters actually originate in Chinese folklore, and were adopted in Japanese storytelling. See below links for some good online English-language sources! 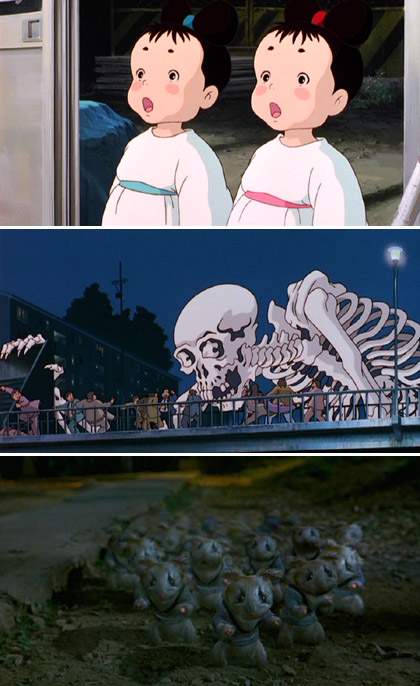 The spooks are active and eager in Pom Poko (twin girl spirits and giant skeleton) and the Great Yokai War (sunekosuri, hamster-like magical creatures which are not so prominent in Japanese folklore, but very prominent in this movie).

The first film worth checking out was released by the great Studio Ghibli in 1994. The animated Pom Poko is the wonderfully entertaining, often sad ecological story of tanuki, raccoon-like creatures that dwell in Japanese forests who are pushed off of their land by human development. The cunning but lazy creatures plot to use their shapeshifting abilities to scare the humans out of construction zones and renew respect for the various Japanese spirits, flora and animals that inhabit the woods. They are depicted in natural tanuki form, a cartoonish variation of the tanuki based on traditional Japanese sculptures (complete with pot bellies and over-exaggerated scrotums - explain that one to the kids!), and their various sneaky transformations. Ultimately, after a series of small-scale scares, the tanuki resolve to push the humans over the edge by staging a massive yokai festival on the streets, which features many spooks and references to Japanese ghost stories. Like many Studio Ghibli works, Pom Poko is rather mind-blowing, and contains a lot of deep, potent messages about how we treat the natural world and how humans have drifted away from respecting its mysteries. 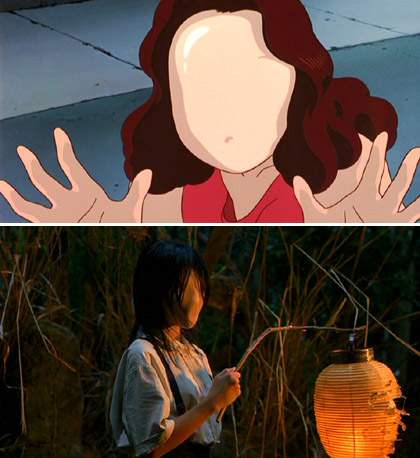 "I have no face!" One of the humourous and twisted yokai depicted in both Pom Poko (top) and The Great Yokai War.

Similar in theme but different in plot is the live-action 2005 fantasy film directed by Takahashi Miike, The Great Yokai War (Yokai daisenso). Like Pom Poko, this is quite a visual delight, especially since the edgy director has chosen to bring yokai to life using a combination of computer graphics, fantastic stop motion animation and cheesy B-movie styled effects. The mixture of tack and high-tech action sequences works really well for this. Although it seems to be a film for kids, it features a great deal of gore, scary scenes and violence. It's rated for the 13-plus crowd, but has a lot of elements that seem more like a children's fantasy film, along the lines of Wolfgang Peterson's The NeverEnding Story (1984). It is the story of young Tadashi who is chosen in a festival to climb a great mountain next to his village to obtain a sword and protect humanity from evil yokai who are planning on taking their revenge on humanity for - well, doing all of the bad things humanity does, such as polluting, making too much waste and pretty much messing up the planet. Ryunosuke Kamiki is really excellent as Tadashi, bringing to life a shy, introverted character who has no choice but to become a warrior with a ragtag gang of forest spirits. The plotline is often outrageous, but so are the tales that inspired this movie. The movie climaxes with a huge yokai festival that gathers to celebrate the conquering of the humans.

The most artful of these films is Akira Kurosawa's Dreams (1990). It is a quiet, challenging film based on the famed director's own night visions, including a fox wedding procession, Yuki-Onna (a dangerous female winter spirit seen by those lost in blizzards), musical spirits of peach trees that were cut down, and a village filled with watermills that exists harmoniously with nature and spirits. It's truly beautiful, colourful and poetic, but it certainly won't be for all movie audiences. Some might find it plodding. Kurosawa has always been one to take filmmaking to a new level; he has brought traditional and satirical Japanese tales to life in Rashômon (1950), The Seven Samurai (1954), The Hidden Fortress (1958), Ran (1985) and the wonderfully told commentary on the post-Hiroshima generation, Rhapsody in August (1991). 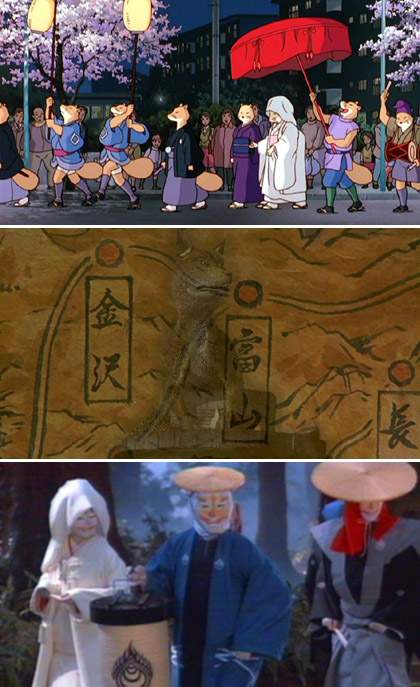 The Japanese kitsune (fox), one of the most famous yokai known for their intelligence and magical powers, are depicted in (from top) Pom Poko, The Great Yokai War and Dreams.

It is wonderful to see old tales being brought to new generations via these movies, and they are all well worth watching especially to gain a different cultural perspective on the world of ghosts. In many ways, these Japanese filmmakers are light years ahead of where we are, putting out amazing films with deep environmental messages at times when the popular environmental movement lagged, bringing dreams to life in live action form and pushing the very bounds of the kinds of stories we are used to seeing made into movies.

What is your favourite Japanese yokai?