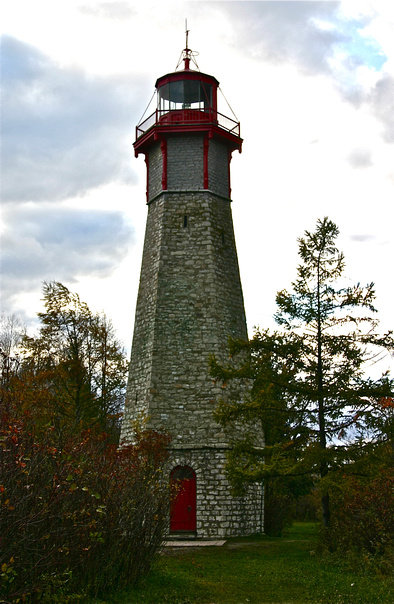 The parks system at Toronto Island is truly one of the most spectacular in the city. Everything from the Centreville amusement park -- with it's Haunted Barrel Ride-- to a small community can be found here, and on a warm summer's day, it is probably one of the most interesting walks one can take. The island also contains some sites of historical significance, including a blockhouse that protected the harbour during the War of 1812 between the Americans and the British (Canadians), the ballpark where Babe Ruth smacked his first professional home run against the Toronto Maple Leafs baseball team, and the infamous Gibraltar Point Lighthouse.

It is not often that you run into a historic site that has a plaque telling of a ghost (especially in Ontario!) but here is one of the very few exceptions to that rule. The plaque states that the first lighthouse keeper disappeared mysteriously and that the site is rumoured to be haunted.

The story goes that Mr. John Paul Rademuller was the first lighthouse keeper, and that during those temperate years shortly following the war with America, Mr. Rademuller was a brewer of bootleg beer. Two drunken soldiers made their way to the lighthouse to partake of the illegal brew; however, when Rademuller refused them his custom, they clocked him over the head and killed him. To cover their crime, they dismembered his body and planted poor old John Paul all around his lighthouse.

The story goes that on dark and stormy nights, John Paul Rademuller can be seen trekking up to light his beacon. On other nights (or in other stories), his spectre (apparition) can be seen looking for his lost limbs. To add some credence to this story, lighthouse keeper George Durnan unearthed some bones near the structure in 1893.

Update: June 17th, 2003 While looking through a wonderful (but old) book about various documents pertaining to the City of York (Toronto) entitled The Town of York 1793-1815: A Collection of Documents of Early Toronto put out by the Champlain Society for the Government of Ontario via University of Toronto Press - 1962, we find that there is mention of Mr. Rademuller's murder and that there was no "conviction" for it. Also, we find out the Mr. Rademuller was originally a member of The Royal Household (ie: the Royal staff in London) and worked in the Duke of Connaught's household before coming to Upper Canada to start a German school. When this failed, he was given the post of lighthouse keeper because of his previous service to the crown.