Canadian historian Christopher Laursen reviews a documentary aired on British television last Hallowe’en about the ghosts that haunt the London Underground, including an inexplicable photo that may be connected to the man accused of murdering Charles Lindbergh’s young son in 1932.

The Haunted Tube
by Christopher Laursen

Why is it that people get creeped out by tunnels? Is it the darkness, a sense of claustrophobia, fear of what might be lurking in its passages – or can we sense something ghostly? Last Hallowe’en, British TV network Five aired Ghosts on the Underground, which delved into what could be the most haunted tunnels of all – the tube, a massive subway network that extends to all ends of metropolitan London, carrying with it one billion passengers in the past year, according to Transport For London.

The 47-minute documentary is not only an excellent series of anecdotes by the staff and passengers of the London Underground on their inexplicable experiences over the past several decades, it also give a stunning tour of the stations, pedestrian passageways, foyers and trains of the commuter train system. Many of the visuals are outright futuristic: brightly-lit, colourful, curving spaces void of humans during the wee hours when the tube is closed, bringing a haunting sense of wonder to places usually tightly packed with commuters.

This is in many ways a documentary that, aside from its high-tech cinematography, has the feel of many classic collections of real-life ghostly anecdotes and gives the viewer the sense of what it is actually like to encounter a ghost without the over-the-top drama usually found in films on this topic. So it is not surprising that the documentary sticks to traditional anecdotal conventions by considering the accidental deaths and suicides that have befallen the London Underground in context of the ghost stories – this may or may not be connected to the strange experiences people have had, but it is always interesting to consider the possibilities. 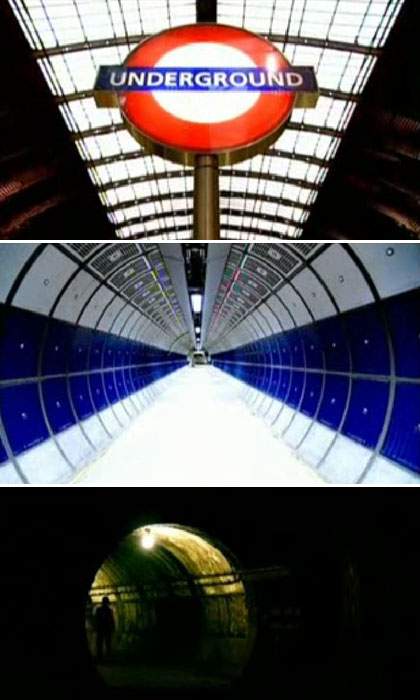 Images from the Five documentary, Ghosts on the Underground, aired last Hallowe’en in the U.K.

There are a few accounts of Underground security seeing lone people on the closed circuit television system (CCTV) that monitors everything. In one case, a staff member went to investigate a person standing on the platform after the Underground had shut for the night. But he found no one in the station. However, his colleague, watching him via the CCTV, said he was standing right beside the person, still standing on the platform in the closed station. The reverse occurred in another story relayed by a staff member who saw an elderly lady standing in a pedestrian tunnel after the tube had closed. He tried to approach her, but she turned a corner and then disappeared. CCTV footage shows no indication of anyone in the tunnel with the staff member.

Many of the best stories are those where staff reported seeing an apparition, and then found out from other staff that they had seen the same thing some time before. Such cases where multiple people have had a similar experience in the same location at separate times pose strong evidence validating that a ghost indeed lurks there on a repeated basis.

One of the stranger cases occurred on a subway carriage on the Bakerloo Line. Karen Collett had taken a family photo on the line two decades ago, and was very surprised to see what appeared to be the image of a man seated in an electric chair behind the glass of the carriage. The late Maurice Grosse of the Society for Psychical Research investigated it and was astonished by the image. “It doesn’t make any sense at all. Here we have a man sitting in an electric chair of all things, squared up in the Underground. Nobody obviously saw it, and yet the camera did,” he said.

A photographic expert, Robert Cox from the National Museum of Photography, said upon inspecting the negative, “The point with this is that it’s an amateur [point and shoot] camera, so to do manipulation of photographs particularly in the ‘80s, you would have needed quite sophisticated cameras,” he said.

The twist happens when the image is compared to a wax figure in the Chamber of Horrors at Madame Tussauds Wax Museum in London of Bruno Hauptmann, the accused kidnapper and murderer of aviator Charles Lindbergh’s 20-month-old son in 1932. In 1936, Hauptmann was electrocuted upon conviction in a New Jersey prison despite his continue claims of innocence. 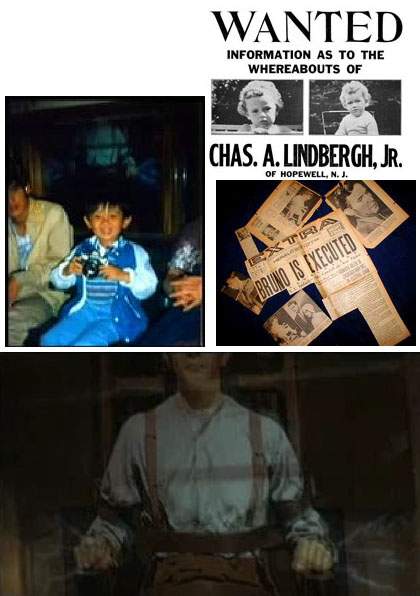 Newspaper clippings on Bruno Hauptmann and a poster seeking the missing Charles Lindbergh, Jr. tell the sad story of the boy’s murder in 1932. In Ghosts on the Underground, Karen Collett’s photo with her family shows a ghostly figure behind the glass that the documentary producers overlaid with the image of the wax figure in Madame Tussauds Wax Museum in London. The similarity is exact, minus the blue lightning coming out of the man’s hands in the subway photo.

A photograph of the wax figure, a representation of Hauptmann in the electric chair, overlaid with the photograph taken by Collett shows an identical match between the two images, including the pair of suspenders worn, the buttons and position of the hands of the wax figure. “The only difference with mine is that there are blue sparks to indicate he was being electrocuted coming out of both fingers,” said Collett. This has led sceptics, including photographer Robert Cox, to argue that there was a poster in a station advertising the wax museum, however Madame Tussauds Wax Museum confirmed that they have no record of such an image of Hauptmann has ever being used in advertising.

The intriguing denouement of the tale is Karen Collett recalling taking a friend to get a reading from a medium. Collett sat outside while her friend spoke to the medium. Afterwards, the medium approached Collett and told her he had a message for her. “I looked at him and said, ‘But I’m not here for a reading.’ And he said, ‘It’s about your photo. I just want you to know that the man said, I’m accused of something I didn’t do, but I did something else.’ And that was the end of the message.” Bruno Hauptmann had claimed innocence for the crime of killing Lindbergh’s son until the day he died, even after being encouraged that a confession would save him from the electric chair.

This documentary vividly entices viewers to consider the strangeness that lurks in the shadows of London’s Underground. It might make you think again if you see something strange in any subway system.

Have you ever had a ghostly encounter on public transit?

You can watch the trailer for Ghosts on the Underground here

A BBC website with more ghosts stories from the London underground

The kidnapping of Charles Lindbergh’s baby