Over the years we have received several reports from frightened people that suggest Old Hag Syndrome or Sleep Paralysis as a probable explanation for what is happening to them. Here is an example given to us by a sufferer of Old Hag Syndrome:

"I have experienced sleep paralysis off and on for about 17 years. It doesn't happen often (it happened more when I was a teenager and after entering my 20's I'd say maybe it has happened about six or seven times).

I've seen a black shadow that looks like viscous air - that's the only way I can explain it. I've also seen black dogs during these experiences however, the shadow always moves away when these dogs begin to bark. I also experience the crushing sensation ( it feels like someone is standing on my chest or holding me down) and a few times I've heard someone talk as well. Fortunately, I've never met the hag, but the shadow I see is enough. It's like the darkness of my room detaches part of itself and moves around. It's very thick and viscous, but I can see through it. It frightens me, but I do know what these experiences are so over the years it has become less and less intimidating. Normally when I do see the shadow I also see a dog ( or a cat, strangely enough). It's like I'm awake and asleep at the same time. I know I'm trying to wake up but I can't breathe or move and trying to talk takes every ounce of effort I have.


The last one I had, I dreamt an old man was trying to tell me something but the dog kept barking everytime he tried to talk. The dog was beside me and barking right in ear. Then the shadow came and it came very close to me, then the dog started again. I did participate in a study about sleep paralysis. I guess one of the terms for what I experience is also called incubus - which means to sit upon."

Symptoms of sleep paralysis can be either one of the following or a combination:

Paralysis: this occurs after waking up or shortly before falling asleep. The person cannot move any body part, and only has minimal control over blinking and breathing. This paralysis is the same paralysis that occurs when dreaming. The brain paralyzes the muscles to prevent possible injury during dreams, as some body parts may move during dreaming. If the person wakes up suddenly, the brain may still think that it is dreaming, and sustains the paralysis.

Hallucinations: Images or speaking that appear during the paralysis. The person may think that someone is standing beside them or they may hear strange sounds. These may be dreamlike, possibly causing the person to think that they are still dreaming. Often it is reported as feeling a weight on one's chest, as if being underneath a person or heavy object. 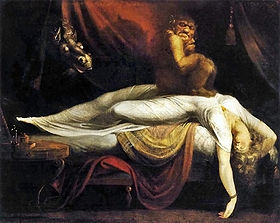 These symptoms can last from mere seconds to several minutes (although they can feel like much longer) and can be frightening to the person. There may be some body movement, but it is very unlikely and hard for a person to accomplish.

Old Hag Syndrome or Sleep Paralysis can only be diagnosed by a qualified, and licensed medical professional. If you feel your "paranormal experience" sounds similar to what has been reported above please do discuss the possibility of sleep paralysis with your family physician.

Clonazepam is highly effective in the treatment of sleep paralysis. The initial dose is 0.5 mg at bedtime, while an increase to 1 mg per night might be necessary to maintain potency.

Our thanks to the experiencer for sharing their sleep paralysis experiences with us.

Wrestling With Ghosts: A Personal And Scientific Account Of Sleep Paralysis by Jorge Conesa Sevilla (Xlibris, 2004)

The Terror That Comes in the Night by David J. Hufford (University of Pennsylvania Press, 1982)

Isolated sleep paralysis and its associations with anxiety sensitivity, history of trauma, paranormal beliefs, and life stress in a black sample by Holly Joy Ramsawh (ProQuest/UMI, 2006)