The Smell Of Sasquatch

There were often only a couple of vehicles in the parking lot, so I generally would only come across few hikers. It was my second trip to the Bugaboos in 1994 that I wandered up into the alpine meadows and found a huge boulder to have a rest on. I had a rather euphoric nap lulled by sunshine and the fresh mountain breeze. After reaching an overlook where I could view the entire valley and glaciers in the magnificence, it was getting to be mid-afternoon, and I thought it best to head back with the half day drive back home.

There was a low-lying forest at the bottom of the valley, not far from the parking lot. There had been a massive frost, and all of the trees and boulders were covered in ice crystals, making for a magical white kingdom. The air was cold and fresh. I was in quite a calm, relaxed state when I suddenly heard crashing through the trees. I stopped, heart racing, alert that it might be anything from a deer to a bear making the racket. The crashing ceased and I continued walking, only to be confronted by the stinkiest smell imaginable, very strong in the pristine, frost-covered woods. It was very much like an incredible human body odour. I’d never smelled anything like it in the wild, and never have since in my many hikes. I stopped, and heard nothing in the woods. No more crashing noises. Just the silence of mountain woodland. The smell disappeared after a few minutes of walking. 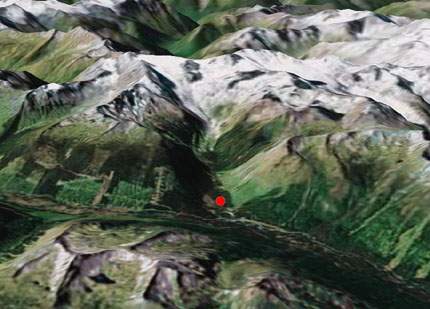 A satellite image of the area in which I encountered the strong smell. The red dot marks the approximate location.

Although I rationalized that I had probably caught scent of a bear, I had heard stories that people who had close encounters with Bigfoot also had caught scent of something very strong. In the 1999 Canadian documentary film Sasquatch Odyssey - The Hunt for Bigfoot, Peter Byrne (who had worked with millionaire adventurer Tom Slick in the 1950s and 60s to track the Yeti in the Himalayas and on an expedition to find sasquatch in the Pacific Northwest) introduced filmmaker Peter von Puttkamer to a retired Oregon state trooper named Jim Hastings who had witnessed a Bigfoot-type creature one night in the late 1970s, one of the best eyewitness accounts in Byrne’s opinion. Von Puttkamer related Hastings’ tale in an online diary about the making of the film: “He was travelling down a road he’d been on many times, the Dufour gap road, a strip of highway leading down an arid plain, the primeval volcanic shape of a snow-capped Mt. Hood looming in the background. It was just after sunset and as he came around the corner he saw what he thought was a man down by the creek bed. When it saw him, it moved up the embankment with great speed, it did not put its arms down to balance itself. When Hastings saw the dark hair covering its body, his first thought was it must be some kind of animal - but when it turned to look at him, he noticed the eyes did not shine. Animal eyes shine at night, but not human eyes. It crossed the highway with great strides then ‘flowed’ up the embankment on the other side.”

Von Puttkamer added, “Hastings had worked for the fish and wildlife service, had been a trained observer all his life and he knew this was no bear. Then there was the smell - often mentioned in Bigfoot sightings. Hastings said he’s hunted bear and elk - he was familiar with those smells; this was more of a human body odour type smell.” In the documentary, Hastings described bears as having musky, dirty smell, not like human body odour he smelled. 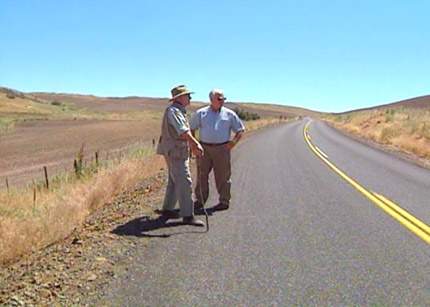 Canadian artist and outdoor adventurer Maureen Enns, formerly of the Pacific Rim Grizzly Bear Co-Existence Study, wrote of Siberian grizzlies, “Most of the year, bears smell like the tundra - sweet and like grass in the fall when it starts to dry out. In June, when they are feeding on plants mostly and are wet, their fur smells like wet grass, almost like dried clover. I can't think of another way to describe it. The bear’s odour is simply stronger than the surrounding vegetation and not that hard to identify when you know it.”

Considering what I had experienced, it is striking to me that Jim Hastings, an experienced officer of the law who also had significant knowledge about hunting and the wilderness, described the body odour smell along with his visual sighting of what appeared to be the legendary sasquatch.

Dr. W. Henner Fahrenbach, a retired biologist from the Oregon Primate Center, has extensively written about and studied the Bigfoot phenomenon. In 1997, he wrote that about 10 per cent of sasquatch sightings have strong smells associated with them, on some occasions “unbearable and overpowering.” He wrote that gorilla researcher Dian Fossey had noted that male gorillas produce “an ‘overpowering, gagging fear odour,’ either when fleeing from enemies such as poachers with dogs, or else in confrontational encounters with other males.” Fahrenback quoted American zoologist George Schaller who described the gorillas’ odour as a mixture of “sweat, manure, charred wood and burning rubber.” Fahrenbach theorized that “Repeated reports of people feeling like they are being observed, being overcome by unreasoning fear, abruptly retreating from the forest without obvious cause may conceivably be due to a hormonal component of sasquatch sweat, perceived below conscious level, although it elicits an immediate emotional response.”

Bigfoot is also popularly known as the Skunk Ape in areas where the creature has been reported. This is because people have reported a smell much different than human body odour in the woods. However, I do not know how many people have reported such a skunk-like smell in conjunction with a visual sighting. It is more common to come across such reports from people who had an experience suggesting that there may be a sasquatch in the vicinity without actual visual contact being made.

Brian Reinhardt of Surrey, British Columbia, reported this strange smell when he visited Harrison Lake with his girlfriend and dog in 1966. He caught a “sudden whiff of a really putrid odour… a cross between a skunk and…a large dead animal.” The dog turned and ran back to the car with its tail between its legs. “I was starting to get the feeling that someone or [some] thing was watching me and… decided to get out of there,” he wrote. He found the dog hiding under the car in the parking lot. “I have often wondered if maybe the smell was coming from a sasquatch. I wish I’d had the nerve to look.”

Journalist John Kirk, co-founder of the British Columbia Scientific Cryptozoology Club, told the Vancouver Sun in a Sept. 24, 1999 article that he had found two footprints measuring 14 inches long by six inches wide in 1997 while attending a group picnic in the Seymour Demonstration Forest in North Vancouver. Like Reinhardt, he described smelling “a combination of skunk and rotten eggs. That’s a trademark of the sasquatch - a bad smell.”

Of course, there are many things that can make a skunk, dead animal or rotten eggs smell in nature, from skunks themselves, to skunk cabbage, to sulphur emissions from hot springs. Smelling a strong human body odour in the open mountain air, however, seems more inexplicable. And the testimony of Jim Hastings makes me wonder even more about what I came close to crossing paths with that autumn afternoon in the Purcell Mountains.