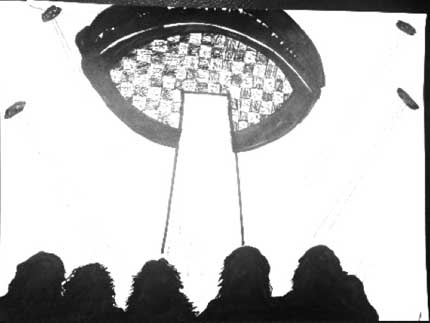 As we go through life, for most of us there will be events that will disrupt our daily lives and affect us emotionally.  Each person copes with stressful events in their own way depending on various factors such as age, personality, beliefs, religion etc..  Each of us processes events differently and sometimes it can take a long time for individuals to come to terms with things that happen to them.  It can be different however, when events occur that are beyond the scope of most people's normal frame of reference, like a UFO sighting.  In this case methods of coping at times can include extensive attempts to forget or repress thoughts about what they have seen.  Such is the case of Alean McLaren of Edmonton,  who recently made the decision to come forward and share her story of an extremely vivid UFO event that she, along with four other people witnessed during the fall of 1975, in Windsor Ontario.  Alean and the witnesses were all in their early teens at the time and were at a loss for how to cope with their sighting.  According to Alean, after the night of the sighting, it was generally felt and accepted by all of the witnesses that there would be no open discussion of what they saw.


Windsor,  the "Border City" has changed drastically over the years, but in the 1970s  there was more forest and natural areas around for people to enjoy and explore, than there is now.  Behind a school in Alean's neighbourhood, in the southwest part of the city Alean and some of her friends had found a small, out of the way corner in a field, to make a campfire. One night there was a group, which included Alean, another girl and 3 boys.  They all knew each other from school.

Alean recalls that she and the boys were really interested in their art classes and enjoyed showing and comparing their artwork with each other.  They were having a great time sitting around the fire on logs, telling jokes, sharing stories and just having fun the way teenagers do. It was a clear night and they could see many stars as they looked up from the fire from time to time.

At one point one of the boys, Randy noticed something odd in the distance in the sky to the south.  There was a group of four lights travelling north toward where they were located. There were very bright white like a star or the light of a plane travelling across the sky.  They were moving at a fairly fast rate of speed and Randy pointed it out to the others asking what they thought the lights could be.


After the group watched the four lights for a few moments they were even more intrigued when they suddenly lined up evenly apart, about 100 feet from each other, in a horizontal row, and continued to approach their location.  Alean recalls that the altitude of the group of lights was quite low compared to what aircraft would travel.  As the lights got closer to them they seemed to increase in size and in brilliance flaring up to four times their original size.  As the lights got closer and closer they then changed their arrangement suddenly, so that there were two on each side, like four points of a square.  Things seemed to be escalating even more when the four lights simultaneously  turned on spotlights or what seemed like searchlight type lights, to the ground in the distance.  It was only a few hundred metres from where the group was now standing in shocked anticipation at to what was happening before their eyes.


The five teens stood awed by what  was happening, but their awe soon gave way to fear when approximately 20 seconds after the four lights had changed their formation a very large (in Alean's words massive) craft seemed to appear out of nowhere in the middle of the four lights.

The craft was a metallic grey so huge that it was not visible in its entirety. Because of its huge dimensions and low altitude, what was visible to them was the bottom portion and front of the object.  A detail that was unforgettable was the grid pattern of lights that encompassed the bottom portion of the "ship." Like a "checkerboard of lights" Alean recalls that was continuously shifting in patterns, with different parts of the grid lighting up at different times.

In addition to the changing pattern there was also a very large spotlight, like those emanating from the other four lights, but several times larger. The spotlight was changing along with the changing patterns of grid lights. Alean also describes a "low vibrational noise" as the craft hovered above them.  It was not a loud sound, but a "constant rhythmic humming" that she heard.

The teens at this point were clutching on to one another in fear and disbelief with many utterances like "What the bleep is it?" over and over.  After some minutes had passed, the four lights retracted their spotlights, moved out of their square formation and began to travel back in the opposite direction of their arrival.  A few moments after the lights had moved off, the craft in the middle slowly rose up and suddenly shot off and out of their sight at an incredible speed, instantly disappearing from their view.

Alean recalls the entire event as being around 10 minutes, from the time that Randy had initially spotted the lights in the distance until the departure of the craft. She recalls having the impression that the four lights were like a reconnaissance or guardian craft for the giant craft that appeared after they had lined themselves up.


When it was over the five teens were left in a state of shock.  After their initial questioning of each other the entire group became extremely quiet and pensive.

She remembers lying alone in her room in a state of fear, feeling that no one would ever believe them.  In the days that followed each time she ran into one of the other four that were present she felt more and more that the consensus was that they all just wanted to drop it.  She said that, "no one talked and everyone acted like they didn't see it."  She went on with her life, rarely discussing the incident.  As an adult she happened to run into one of the guys who was there that night.  She asked him if he remembered.  He informed her that he would never forget what he saw but at this point in his life, he just did not "want to go there."


There will always be people who want to hide things like UFO sightings for fear of ridicule or being ostracized, but fortunately for ufology, people also can over time, gather the courage to share their sighting stories, like Alean did.

Webmaster's note: Alean McLaren is a pseudonym chosen by the witness in order to protect her privacy.


Our thanks goes out to the witness for sharing this experience with us. If you have seen something similar at this date/time/location, can add further information to this report, or have experienced something that you believe may be a UFO or UFO related please contact us at admin@psican.org or fill out our reporting form here http://psican.org/alpha/uforeporting.htm Your privacy will be protected and confidentiality is assured.