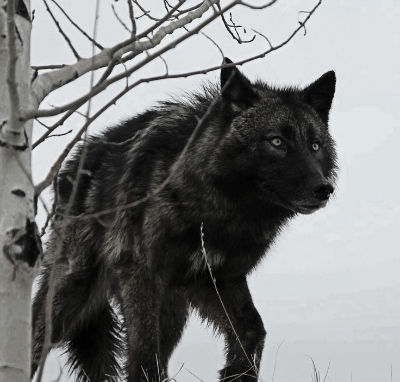 "Hello, I was reading an article on your website about a Dogman sighting near Niagara Falls that was posted in 2012 from the 1960s.  I saw a request from you guys asking about related sightings, I am not sure if it is related but my Mom, brother and I all saw a very large wolf thing off Upper Middle Road in Burlington in the early 90s, 92 or 93 and about 10 years later when I was working in Burlington there was a fair bit of talk about a werewolf stalking the escarpment region between Waterdown and Acton.  The werewolf stories are pure heresy as I never saw anything myself, but if your interested, well here goes.

Back in 92-93 My mom was driving my brother and I home from school in Oakville, we had just moved to Burlington and settled into the Headon Forest community. We were driving along Upper Middle Road, back then it was still mostly farmer's fields and forest ut up there.  It was approximately 4pm on a bright sunny June day.  There was an old house in bad repair along there and it was just off to the side of the driveway that I noticed something big black and weird looking.  It was maybe 100 feet (not metres) away from us.  It looked like a very large wolf, it was standing in a funny way, its front legs were up as if it's front paws were on a large rock, there was tall grass where it was standing so I couldn't see why it looked that way, only that it did. I exclaimed to my Mom "what's that?!"and pointed, she slowed the car down too look, the wolf's head kept pace with the car, watching us.  I swear it wasn't seeing the car but was looking at us in the car.  We couldn't get over the sheer size of this thing, it was about the size of a large Black Bear but very much wolf or dog like in it's head, it had long black/greyish fur.

It wasn't in the shadows, we were seeing it clearly, my mom said it was a large wolf, but we were in the city and that was just crazy. We all had Goose bumps from looking at it look at us.

The whole encounter was maybe 10-15 seconds long, but we were really scared, it looked like it was thinking about charging us, sort of mid pounce, my Mom started driving faster and didn't stop till we were at home, not bothering to do the groceries after all, she was really shaken up.  After that my mom refused to drive along Upper Middle Road for nearly a month.  When my dad got home from work we told him about the large wolf we had seen, he thought we were just joking around but after talking to my Mom and seeing how shook up she was he decided he would go see for himself although he didn't tell us this until the following day.

So my dad apparently decided to stop at the house we described to him on his way home from work the following day, he told us this when he got home. He said that he had parked along side the road and walked down the driveway.  He said he got all the way to the house but saw the windows boarded up and told us no one lived there and there was no dog in the yard.  I think to this day my dad thinks we made it all up.

I have had many encounters with ghosts and other supernatural things over the years, enough to write a book about, I believe in Sasquatch and lake monsters but I am not 100% sure on Werewolves. I suspect a lot of that is people misidentifying bears and Sasquatch or just watching too many horror movies before going for a late night walk/drive.  If someone were to ask me what I saw that day definitively, I would have to say the closest I could come up with, would be a Dire wolf.  I know they're supposed to be extinct but the sheer size of this thing just makes me say no to dogs and the head was wrong for a bear.

The second bit here is something that was told to me, I did not experience it myself so I cannot say it is a sure thing.

Back in the early 2000's I guess about 2003 I was working security at a residential complex in Burlington and I started overhearing talk of a Werewolf sighting up near Acton.  I didn't think much of it at first but as the nights passed more and more people were talking about more sightings, people were getting afraid to go out at night even in town.  I mentioned this to some friends that worked at another Building across town and they said they had heard it too and that they had spoken to someone that had, had an encounter with something outside Waterdown along the escarpment.  A couple weeks later 3 more friends called me up to say that something had kept pace with them along King's Road while they walked back to Burlington from Waterdown the night before.  They said they heard heavy panting and growling.  They were terrified and refused to walk or bike along that part of King Rd. again for as long as I knew them.

After about 3 weeks the stories all died off and no one mentioned it again, to this day I have no idea if there was anything too the stories or if it was just people scaring people with urban myths and such.  As the years passed I would hear strange tales of something stalking the Bruce Trail and also the Hydro fields that cross the Bruce Trail but no one could ever give any definitive answers, it was always the "someone heard it from someone else's sort of nonsense.

With how much of Southern Ontario is built up I highly doubt anything large such as either a Werewolf or Sasquatch could possibly travel unnoticed.  On the other hand cougars have made it back into Ontario and I myself have seen packs of Coyotes travelling down King Road all the way to the lake so who knows maybe there is something out there stalking the forests of the Bruce Trail.

In my 36 years of life these are the only remotely wolf like encounters I have heard of from around my hometown area, I am sure further north there could be more."

Our thanks goes out to the witness for sharing this experience and other information with us. If you can add to this report or have had a similar encounter in Canada please email us at admin@psican.org Your privacy will be protected.