ufo details report: On the evening of June 8, 2015, at 10pm, I was looking at the sunset over the ocean from my patio in Nanaimo.  It was a beautiful, warm, sunny evening.  Looking north-east toward the horizon, I saw a small bright light.  I thought it was a plane because it left a tail behind like planes do.  The light moved quickly towards Texada Island becoming larger and brighter.  Then the light just stopped there.  I thought perhaps it was a plane in trouble and I was preparing for it to crash into the island.  But it did not, it just stayed there beside Texada Island.   I went inside the house and got the binoculars and returned back outside.  Through the binoculars the light looked liked a ball of light surrounded be a dark cloud..smoke I thought.  Then after a minute the light just disappeared and left a cloud behind.  Wow I thought, was that a plane? A meteor?  But then a second light appeared on the horizon.  And it too came to stop in the same place.  This time I got my phone and took a picture.  I had to zoom to see the ball of light by Texada Island.  It disappeared too.  A third light appeared and disappeared after that.  I would say that it all took about fifteen minutes.  Later that night, about midnight, I went out again to look at the night sky.  I don't know if this is related but there was a very bright light which I thought was a star in that direction. The star was very bright and glowed red. 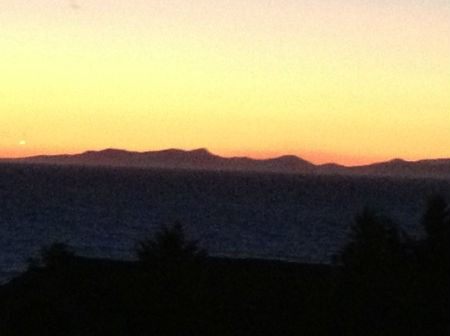 The photo was taken by the witness in Nanaimo looking across the ocean towards Texada island.  The camera was zoomed. 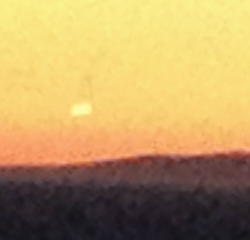 "The light that I was talking about is on the left of the picture, the trail it left just barely visible.  This was the second of three lights that appeared one after the other."

In further correspondence the witness directs us to this report which she feels is similar to her own. "My mother-in-law forwarded me this info about another sighting over Texada Island a year ago.  The light is very similar to what I saw and a similar location. http://canadaufo.blogspot.ca/2014/08/ufo-with-unnatural-glow-rises-from.html

On July 8, 2014, at 11pm.  The witness's husband said that he was at the kitchen window looking out over the water when he saw a bright light.  He went outside and looked toward Lasquite and Taxeda Islands.  There were four balls of light in the sky not moving.  He went and got his camera. You can see the detail in the ball of light.  He said that after about five minutes the balls of light just got fainter and then disappeared. 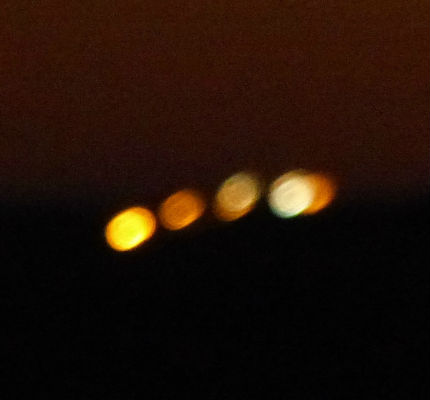 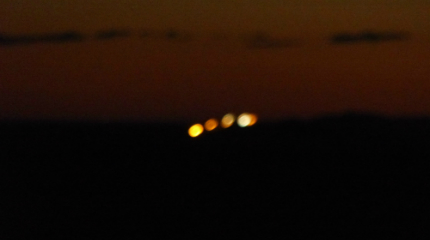 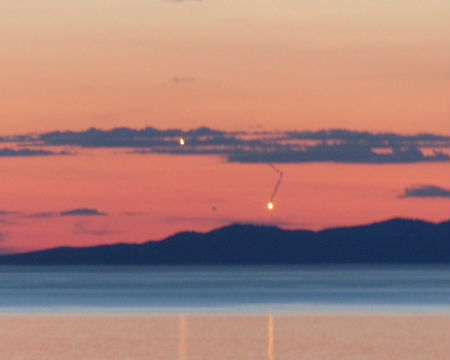 The witness writes in and sent in the above photo taken June 26th, 10:10 pm. "There were more lights that lasted 5- 10 minutes each over a half hour period. Yes the lights are the same as last time but higher in the sky this time.  You can see their reflection in the water.  My husband believes them to be military parachute flares."

Our thanks again to the witnesses for contacting us and sharing their photos.