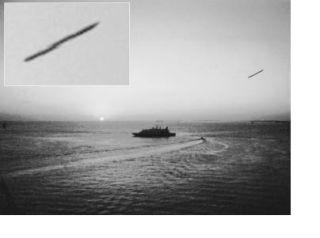 Mysterious object photographed over the Strait of Georgia. Photo courtesy of Brian Vike

A jet was flying due east, most likely to Vancouver International Airport. The sun glistened off part of the jet’s body. Following behind the jet on the port side, a disc followed at exactly the same speed.

When Canadians looked up, up in the sky in 2008, an unusual number weren’t able to identify what they were looking at as either a bird, a plane ... or anything else.

In all, according to Winnipeg-based Ufology Research, there were 1,004 reports of unidentified flying objects across Canada in 2008, an increase of 26 per cent over 2007. Reports had been filed by witnesses with government and military agencies, police, civilian UFO groups and online UFO websites.

“There has definitely been an upswing,” said Vike, a former mill worker who runs HBCC UFO Research from his home in the B.C.’s Central Interior.

There could be a number of reasons, he continued, including more actual events taking place, but Vike suggests a lot of it has to do with the advent of the World Wide Web.

“The Internet makes a big difference,” he said. “Before, people would send a letter, but they often wouldn’t know who to contact if they saw something. They would keep it to themselves because they didn’t want to be laughed at.”

Vike said he believes the upswing in sightings is just the tip of a very large iceberg, because of this fear of ridicule.

“I bet we only get five per cent of what has been seen,” he said. “Nobody wants to talk about it for whatever reason, but I bet if I walked around Parksville with my HBCC UFO Research jacket on, you would be surprised at how many would say, ‘oh, I saw something last month that was really weird.’”

I was lying on my back as the sky darkened to look at the stars. I saw what I thought was a satellite, as it did not blink, but appeared to be moving. As I continued to watch, it stopped and changed direction and moved behind clouds. As I checked other parts of the sky I found more of these odd-moving lights — at least four at any given time.

These lights appeared to be at a high altitude, but moved quickly from time to time ... It was then that it peeled out in an opposite direction and stopped and zig-zagged and even appeared to be forming some type of figures with its movement.

Most of what Vike does is to turn UFOs into IFOs, identified flying objects. The vast majority of strange sightings in the sky, he said, are easily explainable.

“A lot of them are easy to figure out from the description,” he said. “I get a time and date and the first thing I do is find out where the International Space Station was at that time.

Vike said the Parksville sighting falls into this category.

“The lights were up really high, lots of these little lights up in the sky,” he said. “They may have been satellites if they were flying in a straight path, but when they start stopping and start zig-zagging, that’s pretty unusual. I don’t know of anything that can maneuver like that. A jet fighter can do good maneuvers, but they still have to curve out, and some of these were very sharp, going straight across and then stopping and turning back on itself.”

On the night of Sept. 3, 2008 I stepped out side to have a smoke, as I live in a basement suite with my two birds. I just lit my smoke when I heard the sound of a jet in the sky. I looked up and sure enough, there were two jets, like air force jets. As I watched them, I saw something that was travelling at a high speed and not far behind them. It was round had many different coloured flashing lights rotating around the bottom.

All of a sudden it just stopped following them and turned and went out over the ocean. It stopped again and the craft broke up into three separate orbs. These orbs went around at a high rate and ... went up and down and sideways before they rejoined again. I got scared because they didn’t look like they were so far up any more. Just as I turned to go in and get the phone, I saw it start to spin at an incredible rate of speed. It shot straight up and was out of sight in ... three seconds.

Although Vike said he has seen an increase in reported sightings of odd things in the air from Vancouver Island over the past year, he said it’s not one of the recognized hot spots for strange sightings.

“I think Vancouver Island is pretty average,” he said. “At times it can get a good spike going, but I think it takes somebody to say they saw something and contact the media and then, bang, you get a whole whack of reports coming in.”

Some of these reports, he admits, are hoaxes, but after nine years of devoting his life to his research, following an industrial accident that left him unable to work in the mill anymore, he has learned how to tell them apart.

Unidentified flying objects, he stressed, are unidentified, so to suggest they are alien space ships is most often unhelpful at best.