It Is Like Ghostly Deja Vu All Over Again Or Is It? 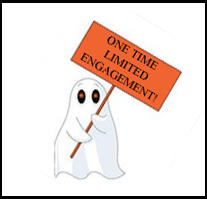 Imagine you're at home, work, or school... or even visiting someplace.  You look out a window or into a yard space and see an odd bird... almost a hybrid of an owl and some sort of 'average' bird with its big eyes, dark grey and black feathers, short and fat legs, rounded tail and wing tips, making a kind of grumbly-whistling sound.  As the odd bird strikes you as weird and not normal to the environment you're in, it dawns on you that this could be something special, you might try to grab a photo or recording of it hurriedly (making a blurry or almost pointless image or low quality rushed sound recording,) or at least, you may attempt to remember everything about the odd bird you can in detail and look into it further later on.  While you're fumbling about or trying to strain your abilities to remember the details, the bird flies off.

After gathering your notes/recordings/wits, you whack away into Google... or maybe just tell a friend with an interest in birds... and lo and behold, you may have caught sight of a rare New Caledonian Owlet-Nightjar (potentially nowhere near it's home turf!)  Excited by this, hundreds of 'birders' head to the site... for days... months... years... never QUITE catching the same sight of the bird... occasionally noting near misses which they assume is the rare bird... often seeing other birds that may be similar or perhaps the same bird, but again, never quite being sure about it.

Imagine if this went on for decades... potentially centuries... the near misses and mistakes being tacked on to the story of the New Caledonian Owlet-Nightjar sighting over time.

"That weird noise! It MUST be the New Caledonian Owlet-Nightjar because that was what was seen here all those years ago!"

Question:  How many people in London's Hampton Court have identified Catherine Howard running down the corridor to the chapel to bang on the door to grab her husband's (Henry VIII) attention and plead for mercy before going to her execution?

Answer: Unknown... only one original account remains... sort-of... and historically, it doesn't stand up to scrutiny.

During her last days at Hampton Court, Henry was actually warming up a little, even writing her love letters.  When outside forces did push Henry to consider a trial (and eventual execution for Catherine's potential dalliances,) she was first moved to a nunnery... with little warning.  It's unlikely this would have given her time for the ghostly run... and, to boot, it would be after her move to the nunnery that the guards would have been sent to take her to her last home, and the likely tip-off (pun intended) of her fate with the move to the Tower of London.

Question:  Sticking with London, how many people are said to have seen the "black amorphous shape" that lingers around Amen Court prior to the advent of the walking ghost tours?

Answer: It appears only one... in 1638... that of a black demon dog which is attributed to the "shape"... and a person "confirming" the sighting to that witness.  After that, it doesn't appear until ghost stories and tours start talking about it ("A Book of Real Ghosts", William Oliver Stephens - 1949 was the earliest I found...)  The site certainly deserves a good ghost, and the history is rather bleak, but when you look at the actual report (not just the historical justifications,) then it gets a bit thin.

Question: Stepping onto this side of the Atlantic, how about the ghost of Major Andre and his white horse at Raynham Hall on Oyster Bay...

Answer: One... in and around the 1930's at stated in a journal by Julia Weeks Cole, written in 1938, but the exact date of the sighting was not mentioned...

Let's stay here as Raynham in the US has another ghost...

Question: How many people saw the apparition of an elderly man descending the staircase at Raynham?

Answer: One.  Susan Coles Halstead, Julia's sister, as mentioned in the above journal. With this Raynham Hall, the more recent incidents reported (in the modern information age,) have been more "auditory only" with the swishing of petticoats heard and occasional footsteps, but the elderly man..?

Now, there is a new apparition at the home... first reported in 1999 in the garden.  A young bearded man with brass buttons  on his jacket... this was reported in one source, Sue Smitten's 2004 book, "Ghost Stories of New York".

Close to home, I could ask how many witnesses have seen moving furniture in the officer's quarters at Fort George in Niagara-on-the-Lake?  The answer is one known incident and (perhaps) three witnesses... no more since then.

How many people have seen the man in the "frock coat" at MacDonald Mowatt House in Toronto?  One and a "possible" witness on two occasions.

I bring all these up because all these sites are under either a significant amount of attention to those interested in ghosts, or at the least, are 'known/published haunts' and a new story or witness wouldn't be quickly dismissed without good cause...

...and yet, so few reports of the same (or blamed?) ghostly experiences.  In some places, the ghosts are actively sought out with equipment being placed at the perfect spot to capture... well, potentially to re-capture something that hasn't been seen or experienced in decades if not, in some cases, centuries.

The interesting thing about famous haunts is how an original story, like the 'Phantom Funeral Procession' at the Tower of London, is seen only once at one time, but is seemingly expected to repeat itself for new observers.

Humans look for patterns.  We assume if something happens in a place once, it's likely to happen again rather quickly.  Think of news reports of shark attacks... rare in the extreme with humans, but how many people stay away from the oceans (even thousands of miles from where the attack happened) in fear of it happening to them?  We all know, logically, that we're far more likely to be killed accidentally in our own bathrooms, yet it's difficult to find anyone who doesn't have a wee twinge when boarding or about to board an aircraft about to depart.

Being realistic, I think back on John Irving's book, "The World According to Garp" where the protagonist happily buys a home that is the site of a plane crash... because, quite rightly, he feels that the odds are very much against it happening twice.  It could be argued that in order for this chance to become less likely, factors like the house's position in terms of an airport might affect the ratio of probability, but also, looking at it myself as someone who has more than a passing knowledge of civil aviation, I can also state that if the house was on an aviation collision path somehow, this would be quickly and thoroughly changed and safety swung hard towards the house never being bothered by another aircraft again.  Ergo: Garp is right... The one off is very unlikely to repeat.

The same could very well be true of the more prominent and historic ghostly accounts.

So, when looking at a place to potentially find phenomena or have an experience, look more to not only the good story or spooky location, but consider how many reports of the same (or very similar) experiences have happened at the site you're at.  This could answer a rather important question...

A good ghost story is great.  A dark history is fun. A spooky setting is exhilarating... but it's no guarantee of a genuine encounter, if that's what you're looking for.